Unfortunately for the home team,Pushpakumara endured a 'brain fade' of sorts as he played an audacious reverse sweet to throw away his wicket early on. 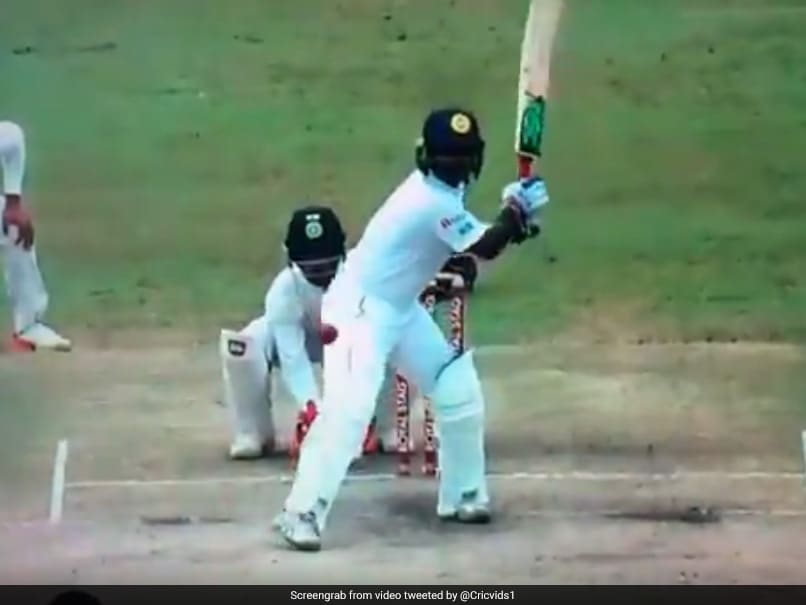 Malinda Pushpakumara threw away his wicket by playing a bizarre shot.© Twitter

The Sri Lanka cricket team was trounced by innings and 53 runs in the 2nd Test by Virat Kohli-led India on Sunday. In doing so, the visitors sealed the three-match Test series with a day to spare. After being bowled out for just 183 in the first innings, the Sri Lankan top order put up a spirited display in the second.

Dilmuth Karunaratne and nightwatchman Malinda Pushpakumara came out to bat on Day 4 with the hosts at 209/2. Unfortunately for the home team, Pushpakumara experienced a 'brain fade' of sorts as he played an audacious reverse sweep to throw away his wicket early on. With the team fighting hard to save to Test and series, greater application was expected from Pushpakumara.

Not just Sri Lanka fans, but Sunil Gavaskar too criticized Pushpakumara for his choice of shot.

Do you think that @imVkohli while standing close in to Malinda Pushpakumara offered him an IPL contract? #SLvIND @ajarrodkimber

Pushpakumara being a lower order batsman is not an excuse. That was an exceptionally poor shot. #SLvIND

Pushpakumara played his role pretty well. But in the end he seemed to forget his role & tried to pull off Glenn Maxwell! #SLvIND

No wonder Malinda Pushpakumara was never given a chance to play for SL. The guy doesn't have brains at all. #SLvIND

Pushpakumara just played the most wonderful shot in test cricket to get out. ????

A guy who plays a shot like #Pushpakumara did, doesn't deserve to play international cricket in 2017. #SLvIND

Now that I've seen Pushpakumara's dismissal. I have, in fact, seen everything. #INDvSL

Pushpakumara's dismissal should be enough to see him dropped. Showed he has no committment #lka #INDvSL

Pushpakumara's shot is his own useless interpretation of the helicopter shot. The Pushpakavimana

The #KP in Malinda Pushpakumara surfaced for that teeny-weeny second.#SLvIND

foolish of Pushpakumara to even try that pathetic shot. Looks even more ugly in the replay #SLvIND

Twin tons from Karunaratne (141) and Kusal Mendis (110) helped the hosts show some fight but an all-round bowling performance by the Indians saw the islanders all-out for 386 in the second innings. Jadeja ended with figures of 5/152 in 39 overs.

Comments
Topics mentioned in this article
India Cricket Team Sri Lanka Cricket Team Sri Lanka vs India 2017 Cricket Malinda Pushpakumara
Get the latest updates on IPL Auction 2023 and check out  IPL 2023 and Live Cricket Score. Like us on Facebook or follow us on Twitter for more sports updates. You can also download the NDTV Cricket app for Android or iOS.