Jasprit Bumrah starred with the ball for India, ending the ODI series as the highest wicket-taker with 15 scalps, six more than the second best Akila Dananjaya. MS Dhoni gets behind the wheel of the utility vehicle that Bumrah got with the Man of the Series award.© AFP

MS Dhoni proved on Sunday beyond any doubt that he is the master behind the stumps in international cricket and now it seems he is also the safest hands behind the wheel in the Indian cricket team. The 36-year-old took the utility vehicle won by Jasprit Bumrah, which he received with the 'Man of the Series' award for the ODI series with Sri Lanka, for a victory lap around the R.Premadasa Stadium in Colombo. Other Indian players such as Manish Pandey, Hardik Pandya and Rohit Sharma crammed into the red car for a spin. India thrashed hosts Sri Lanka by six wickets in the fifth and final ODI to clean sweep the series 5-0. The two teams will face off for a final time on this tour to play a Twenty20 on September 6.

Bumrah starred with the ball for India, ending the ODI series as the highest wicket-taker with 15 scalps, six more than the second best Akila Dananjaya.

Following the prize distribution ceremony, Dhoni took the keys of the utility vehicle and got behind the wheel. Manish Pandey left the driver's door open and stationed himself there while Hardik Pandya occupied the passenger seat and Ajinkya Rahane got in the back.

Kedar Jadhav, with the series trophy in hand, sat himself down on the roof while Axar Patel, Shardul Thakur, KL Rahul, Yuzvendra Chahal, Bumrah, Rohit and Bhuvneshwar Kumar all crammed themselves in the open cargo area. 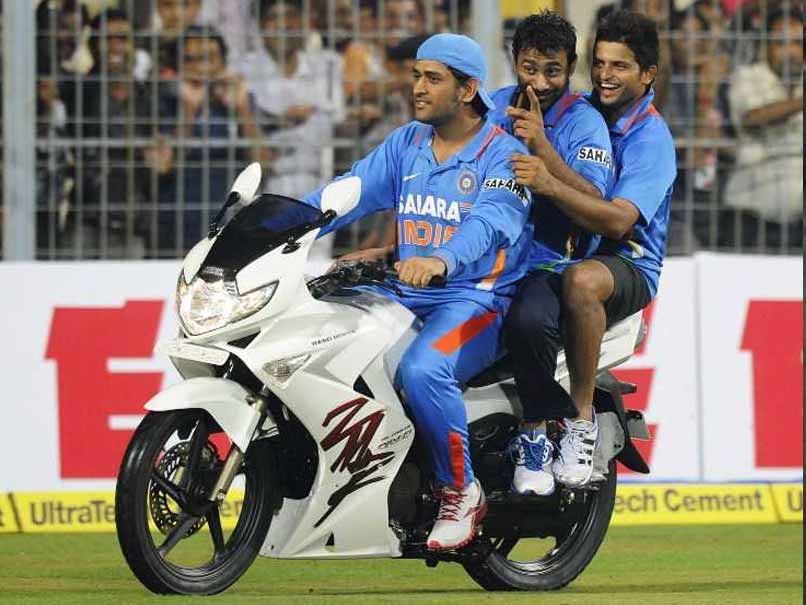 MS Dhoni takes Praveen Kumar and Suresh Raina for a spin in 2011 at the Eden Gardens.
Photo Credit: AFP

The former India captain's love for bikes is well documented. Dhoni had done a somewhat similar thing in 2011 when he was given the 'Man of the Series' award and along with it a motorbike for his sterling performance against the visiting England side in the ODIs.

At the time, Dhoni took the bike for a spin around the Eden Gardens with teammates Praveen Kumar and Suresh Raina in tow.

Meanwhile, Dhoni added another feather to his illustrious cap as he became the first man in One-day International cricket to complete 100 stumpings.

The 36-year-old dislodged Dananjaya's bails to complete his century of stumpings.

Ahead of the second ODI against Sri Lanka, the former India skipper had 98 stumping to his name, one behind Sri Lanka’s Kumar Sangakkara. He equalled the Sri Lankan at 99 when he claimed the scalp of Danushka Gunathilaka off leg-spinner Yuzvendra Chahal.

Sangakkara, who retired from international cricket in 2015, has 99 stumpings in 404 matches, while Dhoni achieved the feat in his 301st ODI.

Comments
Topics mentioned in this article
India Cricket Team Sri Lanka Cricket Team MS Dhoni Jasprit Bumrah Sri Lanka vs India 2017 Cricket
Get the latest updates on IPL 2020, check out the IPL Schedule for 2020 and Indian Premier League (IPL) Cricket live score . Like us on Facebook or follow us on Twitter for more sports updates. You can also download the NDTV Cricket app for Android or iOS.