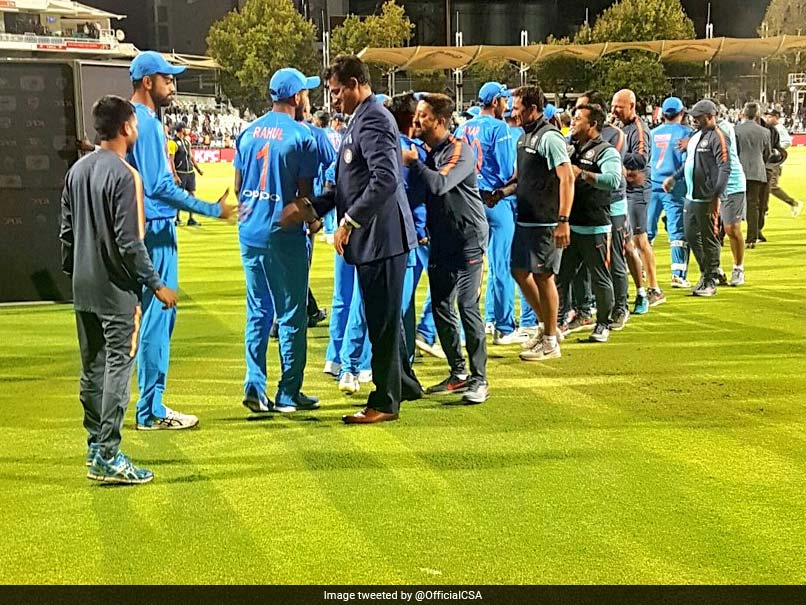 India beat South Africa by 7 runs in the third and final T20Iat Newlands, Cape Town to clinch the three-match series 2-1. Bhuvneshwar Kumar kept his nerve as he gave away only 11 off the last over when South Africa needed 19 to win. Christiaan Jonker played a brilliant cameo at the end to keep South Africa in the hunt after the Proteas failed to keep up with the asking rate throughout the innings. The South African skipper JP Duminy played a lone hand of 55 before getting dismissed that many thought was the final nail in the coffin for the Proteas before Jonker took matters in his own hands and gave South Africa a glimmer of hope in the later stages of the match. At the end South Africa could only manage 165 for 6. (Scorecard)

Catch all the highlights of India vs South Africa, 3rd T20I, straight from Cape Town

01:08 IST:Bhuvneshwar Kumar has been adjudged as the man of the series.

01:05 IST:Suresh Raina has been adjudged as the man of the match.

00:49 IST:Brilliant yorker from Bhuvneshwar, the hosts need 10 off 2 balls.

00:47 IST:Single down the ground, South Africa need 13 runs from 3 balls. Nail-biting finish this is!

00:41 IST: SIX!Slower ball from Bumrah and Jonker, the debutant, smokes the length delivery for a maximum.

00:40 IST: FOUR! Behardien starts the 19th over with a boundary. Bumrah strays on the leg-side and Behardien flicks it with power.

00:39 IST: FOUR! Jonker finishes the over with two boundaries. South Africa need 35 in 12 balls. Can they pull off an unlikely win?!

00:36 IST: FOUR and a SIX! Jonker is taking Shardul to the cleaners. Is this the big over the South Africans needed?

00:29 IST: FOUR!Chris Morris, the new man in, edges Bumrah for a boundary in the third-man region.

00:27 IST: OUT! Full and wide from Thakur, Duminy going for the big one, hits the ball straight up in the air and Rohit takes a good catch.

00:25 IST: FOUR! Full and wide from Thakur, Duminy guides the ball through covers for a boundary to bring-up his 11th T20I fifty.

00:18 IST: SIX! Length ball from Bumrah and Duminy deposits the ball back in the stands. He moves onto 46*.

00:10 IST: OUT! Pandya gets his first wicket of the night as Klaasen flat bats the ball to Bhuvneshwar Kumar. South Africa, 79/3, are staring at defeat.

00:04 IST: SIX! Duminy smokes Axar for back-to-back maximums on the leg-side. The second six was mammoth!

Proteas are now 52/2 at the end of 10 overs in their run chase. With 121 runs needed with 8 wickets remaining in hand. #KFCT20 #SAvIND #ProteaFire pic.twitter.com/qAIFIjCvGe

23:56 IST: Four! Short delivery from Raina and Duminy pulls it with authority for a boundary.

23:55 IST: OUT! Short delivery from Raina, Miller gets crunched for space as he pulls the ball only for the fielder at deep mid-wicket to gobble up the ball. South Africa 45/2 in 9.1 overs.

23:47 IST: FOUR! Short delivery from Raina and Miller clobbers it through covers for a boundary. Dhoni, behind the stumps, says "Nahi, nahi Raina chhota nahi (No, not short deliveries)".

23:45 IST:South Africa are not being allowed to get in the groove, such amazing is India's bowling at the moment. Miller and Duminy, in the middle, have no answer to India's attack.

India have been a terrific on this tour, played wonderful cricket and have won over a lot of South Africans with the way they have played the game as well. Kudos to @imVkohli and his team #SAvsIND

23:40 IST:Boundaries have dried up for the home team as the Indians are bowling really well.

23:30 IST: FOUR! Full and wide from Shardul Thakur and Miller lifts him over covers for a one-bounce boundary.

23:27 IST: OUT! Bhuvneshwar gets the first breakthrough, Hendricks looking to go big, mistimes his shot and Dhawan completes a catch.

23:24 IST:What a start from Bumrah, concedes three runs in his first over.

23:20 IST:Jasprit Bumrah introduced into the attack.

23:17 IST: Four! Back of a length delivery from Bhuvneshwar and Hendricks punches it off the back-foot for a boundary.

23:16 IST:Bhuvneshwar Kumar is opening the bowling the India.

23:15 IST: Welcome back to South Africa's chase. David Miller and Reeza Hendricks are opening the batting for South Africa.

23:01 IST:Rapped on the pads and the umpire raises his finger. Karthik immediately opts for a review. Given out by the third umpire and Karthik departs for 13

23:00 IST:Morris bowls it down the leg side and Karthik plays it nicely for a boundary. India 168/6

22:58 IST:Karthik tries to play a reverse sweep but fails miserably/ He will get a single

22:56 IST: FOUR!Oh what a shot. Back to back boundaries for Dinesh Karthik

22:55 IST:What a shot first up by Dinesh Karthik. He gets a boundary

22:53 IST:MS Dhoni goes for the big one but mistimes it completely. He is caught at the boundary for 12. India lose their fifth wicket

22:50 IST:Perfect length delivery by Junior Dala but the inside edge of the bat gives Dhoni a boundary. India go past 150

22:47 IST:Full toss by Morris and Pandya clobbers it for a maximum over long-on boundary. First six for Pandya

22:41 IST:Anything less than 180 will hurt India. With Pandya and Dhoni at the crease, we can expect some fireworks from these two

22:25 IST: OUT! Manish Pandey looking to go big, miscues and David Miller at long-on takes a comfortable catch. Junior Dala gets his second. India 117/3 in 14 overs

22:23 IST: FOUR!Dhawan, dropped again on 34 by Shamsi, dances down the wicket and punches Phangsio straight down the ground for a boundary.

22:20 IST: FOUR!Short delivery yet again by Shamsi and Dhawan pulls it with authority for his second boundary of the over. 100 comes for India in the 13th over.

22:19 IST: FOUR! Short from Shamsi and Dhawan, down on one knee, sweeps the ball powerfully to register his first boundary of the match. Unbelievable !

22:18 IST: SIX!Right in the slot for Manish Pandey from Shamsi and the Indian with full power clobbers the ball for a maximum.

22:17 IST:Brilliant start from the left-arm bowler, concedes just four runs in his first over.

22:15 IST:Aaron Phangiso comes into the attack.

22:10 IST:Reverse sweep by Shikhar Dhawan and he has connected it well. Will get a couple

22:08 IST: FOUR!Misfield by Farhaan Behardien and the ball goes to the boundary.

22:07 IST:Spinners from both ends and they have managed to slow down the scoring rate.

22:00 IST:Dropped! In the air but put down by Tabraiz Shamsi at short-third man. It was a sitter

21:55 IST: FOUR!Raina makes room again to free his arms and then stretches away to play it towards point for a boundary. He has quickly reached 30 off just 15 balls

21:50 IST:Phehlukwayo is the new bowler who replaces Chris Morris.

21:49 IST: FOUR! Short delivery by the bowler and Raina punched it away towards the extra cover for a boundary

21:47 IST: SIX! Oh, what a superb start by the left-hander. Junior Dala pitched it on the leg side and Raina heaved it away for a maximum

21:40 IST: Wicket! Rapped on the pads of Rohit Sharma and the umpire raises his finger.Well he ponders the review, goes against it, and then Shikhar calls him back to think some more. They are not taking it. So, India lose their first wicket in the second over itself

21:35 IST: FOUR!Poor delivery by Chris Morris down the leg side and Rohit hits it for a boundary again. So, a good start by India.

21:32 IST: FOUR!Juicy half-volley and Rohit Sharma hits it straight down the ground for a boundary

21:30 IST:Rohit Sharma and Shikhar Dhawan come to the crease and Chris Morris to start the proceedings for South Africa

21:15 IST: Rohit Sharma: Virat has a stiff back and he needs some rest. It has been a long season for him and unfortunately he misses out but gives someone else a chance to step up. A few changes - Dinesh in place of Virat, Axar in place of Chahal and Bumrah comes in place of Unadkat.

No KOHLI Evens the playing field for the decider #SAvsIND

#TeamIndia Playing XI for the decider game. Virat Kohli misses out due to a stiff back. Dinesh Karthik, Axar Patel and Jasprit Bumrah are three changes for #TeamIndia #SAvIND pic.twitter.com/n2X7mSOHLd

20:54 IST:Will India change the playing XI today. The talks are that Axar Patel might get to play for Chahal.

20:50 IST:Heinrich Klaasen and JP Duminy took the game away from India in the last game to level series 1-1 and the star wrist spinners Yuzvendra Chahal was taken to the cleaners in the last game.

20:45 IST:Hello and welcome to the live blog of the series decider between India and South Africa.

While India have never played any T20Is at Newlands, they will take heart from the fact that South Africa have a not so impressive record there. The Proteas have played eight T20Is and lost five at Newlands with two of those wins coming in the World Twenty20 2007, meaning that they have won just one bilateral game in Cape Town (against England in 2016).

Victory in the previous game will be a reason for buoyancy in the Proteas' dressing room. Stand-in skipper JP Duminy was adamant that they had well-set plans for Indian batsmen and bowlers since the start of this series but just needed proper execution as was showcased at SuperSport Park in Centurion.

Duminy had named an unchanged eleven in the previous game, and it remains to be seen if they will tinker with a winning combination for the series-decider.

Jon-Jon Smuts hasn't come good yet despite his big-hitting prowess, while David Miller's poor form has spilled over from the ODIs. He was persisted with throughout that series, so there is no reason to doubt that he will not be in the team come Saturday.

Jasprit Bumrah's abdominal strain had forced India to make a change, but they will consider a couple spots for this finale. Bumrah's fitness still remains a question mark.

Will the team management risk playing him given the shortened time-frame of this match? The fact that there is a two-week gap before the tri-series begins in Sri Lanka might coerce them into this gamble.

The bowling combination is the other concern. India have shown a propensity to field a left-arm pacer in this format, but Jaydev Unadkat has proven expensive so far.

Given the scenario, Virat Kohli might just be inspired to change the look and shape of his bowling attack.

If Bumrah does play, Unadkat is likely to make way for him. Shardul Thakuar used clever change of pace at Centurion and picked 1/31 in his four-over spell.

The Newlands pitch had played slow during the ODI series, and citing the example of SuperSport Park, there is every reason to expect another wicket on the slower side, if not dual-paced altogether.

Arguably, Chahal bowls a more consistent line than Kuldeep Yadav and this explains latter's omission from the first two games.

However, with Chahal's confidence a bit down, Kuldeep could find himself in the reckoning for this all-important game. Further, given South Africa's frailty against change of pace, India might even be tempted to consider Axar Patel, thus increasing the onus on Hardik Pandya as the third-choice pacer.

India's tour had gained momentum with victory in the Wanderers Test and then they carried it through the ODI series, romping home with a 5-1 margin.

The team management usually clubs all formats together and is celebrating ascendancy over South Africa since the last week of January. As such, they will be keen to fly out with an additional trophy to show for this run of form.

Listen to the latest songs, only on JioSaavn.com
Comments
Topics mentioned in this article
India Cricket Team South Africa Cricket Team Virat Kohli JP Duminy Heinrich Klaasen Newlands, Cape Town South Africa vs India 2018 Cricket Live Score Live Cricket Score Live Blogs
Get the latest updates on India vs South Africa and check out  Schedule, Results and Live Score. Like us on Facebook or follow us on Twitter for more sports updates. You can also download the NDTV Cricket app for Android or iOS.