Jasprit Bumrah was included in the line-up for the 1st Test with South Africa as India opted for five bowlers. 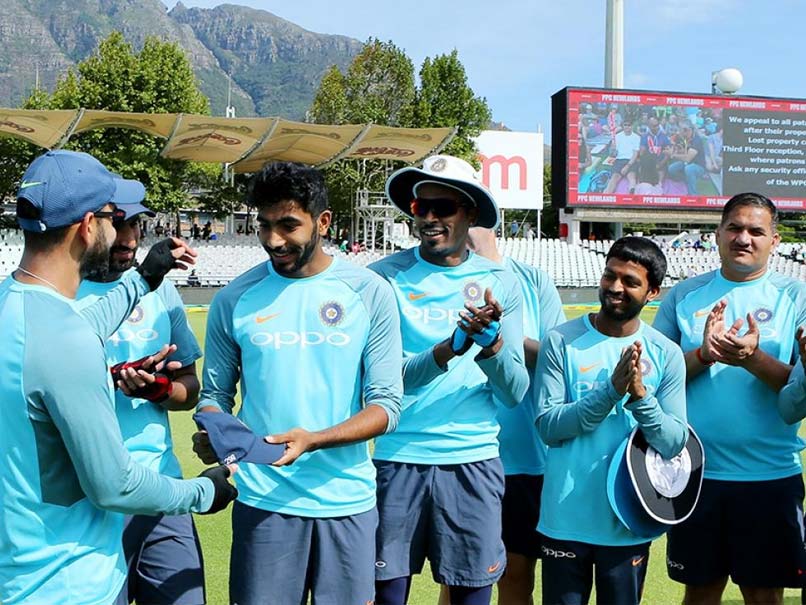 India's unorthodox pacer Jasprit Bumrah received his Test cap from his captain Virat Kohli ahead of the 1st Test of the three-match series with South Africa at the Newlands Cricket Ground in Cape Town on Friday. The Board Of Control For Cricket In India (BCCI) uploaded a video where Kohli was seen presenting Bumrah his maiden Test cap. "Proud moment for @Jaspritbumrah93 as he receives his Test cap from #TeamIndia Skipper @imVkohli #FreedomSeries #SAvIND," BCCI's tweet read.

Bumrah, who made his ODI and T20I debut when Mahendra Singh Dhoni was skipper, has represented India in 31 ODIs and 32 T20Is, claiming 56 and 40 wickets respectively.

Kohli-led Team India will be aiming their first-ever Test series victory over South Africa in their backyard.

Earlier, South Africa had won the toss and opted to bat against India.

India decided to pick four fast bowlers including Hardik Pandya and the lone spinner in Ravichandran Ashwin. The other two quicks are Mohammad Shami and Bhuneshwar Kumar, leaving out Ishant Sharma and Umesh Yadav.

Ajinkya Rahane was dropped and Rohit Sharma was included to bat at five in his place.

South Africa have picked four seamers including Dale Steyn and a spinner in Keshav Maharaj.

Comments
Topics mentioned in this article
India Cricket Team South Africa Cricket Team Virat Kohli Jasprit Bumrah South Africa vs India 2018 Cricket
Get the latest updates on ICC T20 Worldcup 2022 and CWG 2022 check out the Schedule, Live Score and Medals Tally. Like us on Facebook or follow us on Twitter for more sports updates. You can also download the NDTV Cricket app for Android or iOS.