Jasprit Bumrah Can Be Asset On Newlands Track: Ashish Nehra

Former India seamer Ashish Nehra reckons that Jasprit Bumrah is the kind of bowler who can be an asset on the Newlands track in Cape Town. 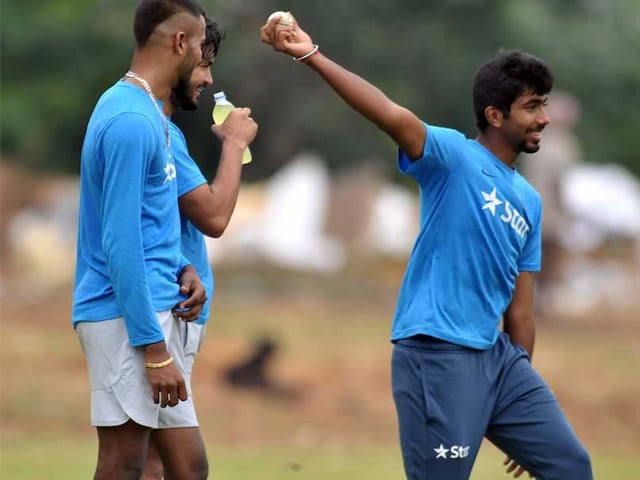 Former India seamer Ashish Nehra reckons that Jasprit Bumrah is the kind of bowler who can be an asset on the Newlands track and would be a good choice for the first Test in Cape Town. Bumrah, who is a regular in the limited overs format for India was picked for the upcoming Test series against the Proteas and can prove to be more than a handy bowler with his awkward action and his ability to bowl yorkers at will.

"Jasprit Bumrah can be a good choice for the first Test in Cape Town. I don't know what's there in the team management's mind but he is the kind of bowler, who can be an asset on the Newlands track during the first Test," Nehra told PTI during an interview on the South Africa tour.

The former left-arm pacer then elaborately explained why he feels that Bumrah could prove to be a good choice. "We have seen Bumrah primarily in white ball cricket but just go back a year and check out how many overs he had bowled for Gujarat in Ranji Trophy.

"He has the most lethal yorker among the five pacers along with good slower ones. Also he has an awkward high-arm action, which can be very difficult to pick initially. All these factors work in Bumrah's favour," feels Nehra, who was a part of the 2001 Test series in the country.

The weather in Cape Town during this time of the year, according to Nehra, will also play a vital role.

"Cape Town, during January, can get hot and the conditions may not be seam-friendly. Now if it becomes humid and the pitch is a flat one, then Bhuvneshwar may not get the desired swing and seam movement.

"Also if one looks at Bumrah's record, he has the ability to bowl long spells. He has done it for Gujarat, so I don't see any reason why he can't do it for India," Nehra said.

Having bowled with the red SG Test ball in first-class cricket, it will be Bumrah's first tryst with the red kookaburra but that hardly is a problem, feels Nehra.

"Bumrah, in last two years, has bowled a lot with white kookaburra in limited overs matches. If we are talking about the seam, it's the same for the red as well as white ball. And when the seam is no longer pronounced, ones who can hit the deck hard get an advantage," he said.

For Nehra, if India goes with three pacers and a spinner, his personal top two will be Mohammed Shami and Ishant Sharma. "Shami is your strike bowler but he will at the maximum bowl six over spells at one go. He is your main weapon and you have to use him judiciously. Now people raise questions about Ishant Sharma's strike-rate but it needs to be realised what he brings to the table.

"Ishant is a bowler, who can stifle batsmen bowling over after over from one end. That is a quality that a lot of bowlers don't have. There have been times that Ishant has created pressure from one end and it has helped bowlers from other end get wickets," he added.

He agreed that the choice of third pacer (provided India play the lone spinner) could be a bit tricky based on conditions.

"It's the choice between Bumrah, Bhuvi and Umesh Yadav. Now Umesh has a fantastic outswinger at a good pace. He has bowled a lot in home conditions during the past season and is also a contender. But I believe the choice would be very much condition specific," he opined.

Nehra reckons India have a good chance of doing well in South Africa as the squad has experience.

"It's well-documented by now that each and every top cricketing nation nowadays is playing well at home. Look at Ashes, where Australia have not only won it but they dominated each of the first three Test matches.

"Obviously South Africa will come hard at us but this is a very balanced team. This is currently the best Indian team that had picked itself," Nehra said.