Following Gujarat Titans' IPL triumph, captain Hardik Pandya and head coach Ashish Nehra had a fun chat, a snippet of which was shared on the IPL official Twitter handle. 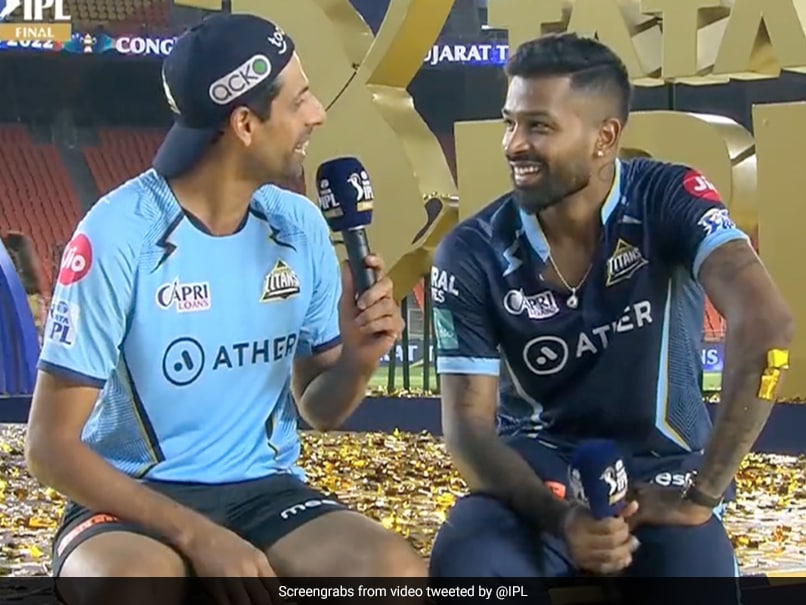 Hardik Pandya and Ashish Nehra speak to each other after GT's IPL 2022 triumph.© Twitter

Gujarat Titans clinched the Indian Premier League title in their debut season, comprehensively beating Rajasthan Royals by seven wickets in the IPL final. Central to Gujarat Titans' victory on Sunday in the IPL 2022 final was captain fantastic Hardik Pandya. The Indian all-rounder first produced a stunning spell of bowling, taking three wickets for just 17 runs to help his team restrict Rajasthan to 130 for nine in 20 overs. Hardik then played a handy cameo to steady the ship in the chase after GT had lost two early wickets. Following GT's IPL triumph, captain Pandya and head coach Ashish Nehra had a fun chat, a snippet of which was shared on the IPL official Twitter handle.

In the video, Ashish Nehra asks Hardik Pandya how he is feeling, to which the GT captain replies: "Very good. Hit a six in the first year, only. Can't be more proud as we have become the champions. Some people said batting and bowling is weak, now we have the trophy, so it's ok."

"The way we played, a lot of credit (to Ashish Nehra). Every player was made to work hard," Pandya said pointing at GT's head coach.

Emotions, insights & a recap of the maiden IPL triumph in their maiden IPL season!

On the mic with the @gujarat_titans' title-winning Captain @hardikpandya7 & Head Coach Ashish Nehra. - By @RajalArora

In the final on Sunday, Rajasthan Royals won the toss and elected to bat at the Narendra Modi Stadium in Ahmedabad. Yashasvi Jaiswal was the aggressor early on but tried one too many shots and perished in the process.

Jos Buttler once again looked in good touch, but Hardik Pandya stopped him in his tracks. Pandya took the big wickets of Sanju Samson, Buttler and Shimron Hetmyer to leave RR tottering.

In the chase, Shubman Gill anchored the innings with an unbeaten 45 off 43 balls. Pandya scored a patient 34 off 30 balls before he was dismissed by a brilliant delivery from Yuzvendra Chahal.

David Miller came in and blasted 32 not out off just 19 balls to finish things off.

Ashish Nehra IPL 2022 Gujarat Titans vs Rajasthan Royals, Final Cricket
Get the latest updates on ICC T20 Worldcup 2022 and CWG 2022 check out the Schedule, Live Score and Medals Tally. Like us on Facebook or follow us on Twitter for more sports updates. You can also download the NDTV Cricket app for Android or iOS.