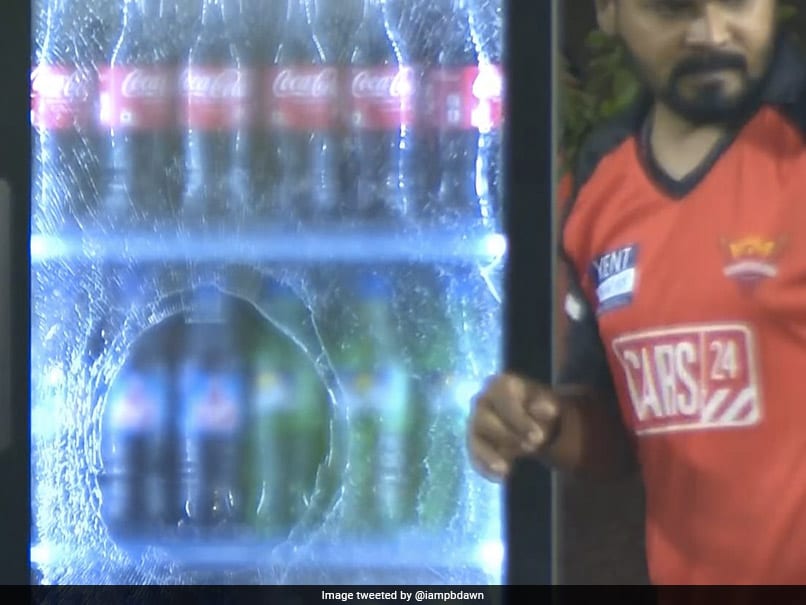 IPL 2022: The fridge glass in the SRH dugout was broken by a Nitish Rana six.© Twitter

SunRisers Hyderabad (SRH) broke Kolkata Knight Riders' (KKR) hearts with a seven-wicket victory in Match 25 of the ongoing Indian Premier League (IPL) 2022 on Friday. SRH chased down the 176 run-target set by KKR with relative ease towards the end to continue their winning run. However, KKR hearts were not the only thing to break. During KKR's batting, Nitish Rana cut a pacey delivery from bowler Umran Malik over the third man region for a massive six. But what caught everyone's attention was the fact that the ball, after landing beyond the boundary line, went and smashed into the fridge glass kept beside the SRH dugout.

The extraordinary scenes were enjoyed by the players surrounding the fridge as well as the batter, commentators and even the crowd who later saw it on the big screen in the stadium.

Rana broke his string of poor scores with a brilliant fifty (54) and along with Andre Russell (49*), ensured that KKR scaled the 175-run mark in 20 overs.

However, SRH overhauled the target in only 17.5 overs with seven wickets remaining.

The win gave put SRH in the seventh spot with three wins out of five games played so far. KKR, on the other hand, are placed fourth currently in the points table.

Kolkata Knight Riders Nitish Rana Umran Malik IPL 2022 Cricket Sunrisers Hyderabad vs Kolkata Knight Riders, Match 25
Get the latest updates on ICC T20 Worldcup 2022, check out the Schedule and Live Score. Like us on Facebook or follow us on Twitter for more sports updates. You can also download the NDTV Cricket app for Android or iOS.