IPL 2021: Glenn Maxwell will be hoping to put in good displays for Royal Challengers Bangalore (RCB) in the tournament's UAE leg. 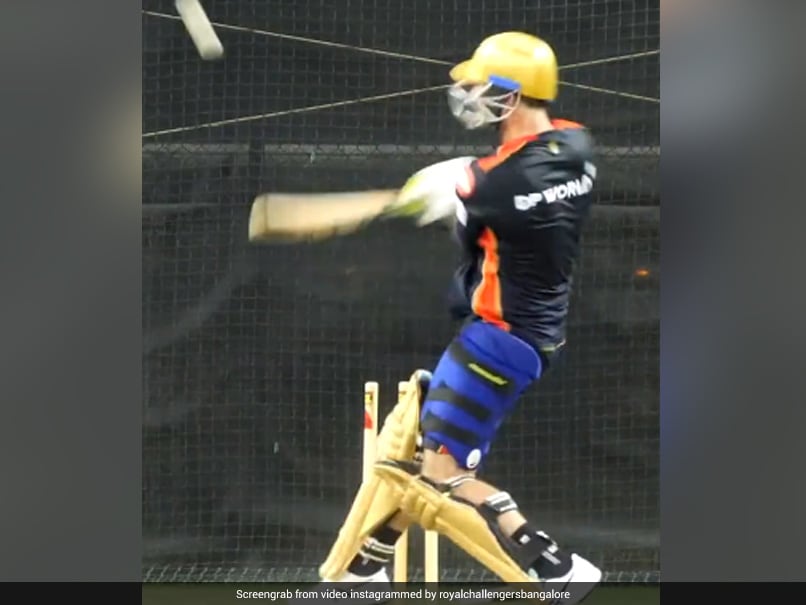 IPL 2021: Glenn Maxwell shows his wide-array of shots during a training session.© Instagram

With the Indian Premier League (IPL) 2021 season set to resume on September 19, Royal Challengers Bangalore (RCB) took to social media to give fans a glimpse of Glenn Maxwell's form. The all-rounder was acquired by the Virat Kohli-led side ahead of the 2021 season, during the Player Auction. Despite underwhelming performances in the past in the IPL, the Australian was in amazing form during the first half of IPL 2021. RCB posted a video on Instagram, where Maxwell could be seen showing his wide array of shots in a net session, including his famous switch hit. The video was captioned as, "Just Maxi in his elements at practice sessions. #PlayBold #WeAreChallengers #IPL2021 #Reels".

During the first-half of IPL 2021, Maxwell scored 223 runs in seven matches, with a high score of 78. He also smashed 21 fours and 10 sixes, with two half-centuries. It is worth noting that the 32-year-old hadn't registered a fifty or hundred in the IPL in the last three seasons.

The Aussie all-rounder also turned out to be a match-winner for RCB this year, putting up some good partnerships with AB de Villiers.

Maxwell will be hoping to build on his form, and keep up his momentum until the T20 World Cup, which will also be held in the UAE and Oman.

"The fact we've got a lot of guys going over for the IPL as a preparation, get a few games in those conditions, it's going to do wonders for our batters," he stated.

"Our bowlers are going to be up and firing by the time the tournament starts. I can assure you everyone is looking forward to hitting the ground running over there," he further added.

RCB have their first outing on September 20, when they take on Kolkata Knight Riders (KKR) at the Sheikh Zayed Stadium in Abu Dhabi.

Australia Cricket Team
Get the latest updates on T20 World Cup, check out the T20 World Cup Schedule and Live Score . Like us on Facebook or follow us on Twitter for more sports updates. You can also download the NDTV Cricket app for Android or iOS.