IPL 2020: Suryakumar Yadav, Jasprit Bumrah Too Good For RCB As MI Close In On Qualification 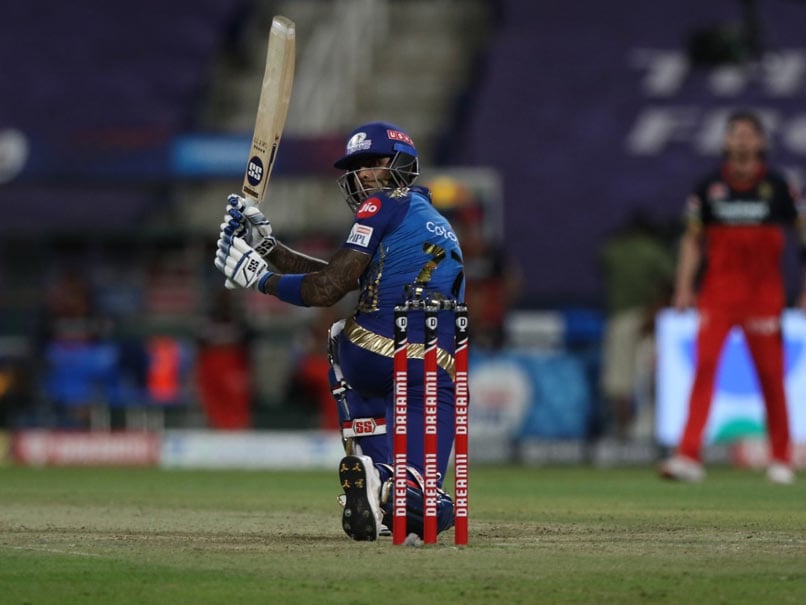 A fine half-century from Devdutt Padikkal was not enough as Jasprit Bumrah first, with the ball, and later Suryakumar Yadav, with the bat, put out masterclasses that guided Mumbai Indians to what was in the end a comfortable 5-wicket win over Royal Challengers Bangalore. Jasprit Bumrah took three wickets to derail the RCB middle order, before Suryakumar Yadav played a wonderful unbeaten knock of 79 off 43 deliveries to help Mumbai Indians comfortably chase down their 165-run target. The win sees Mumbai Indians move to 16 points in the Indian Premier League (IPL) 2020 points table, all but sealing a spot in the playoffs.

Mumbai Indians, with regular captain Rohit Sharma still out with injury, won the toss and opted to bowl.

RCB replaced Aaron Finch with Josh Philippe and the young Australian helped Devdutt Padikkal in getting RCB off to a good start. The two put on a 71-run partnership before Philippe was stumped off Rahul Chahar for 33 off 24 deliveries.

Padikkal kept bringing home the runs and got to his fourth IPL half-century. But before RCB could regain momentum, Bumrah struck in the 12th over to send back RCB captain Virat Kohli for just nine runs.

Kieron Pollard then brought himself on to bowl for an over and grabbed the key wicket of AB de Villiers, who holed out to deep square leg for 19.

But it was Bumrah's next over that completely turned the game around for Mumbai Indians as he got both Shivam Dube and the well set Padikkal. Padikkal finished with 74 off 45 deliveries in a knock packed with 12 boundaries and a six.

From then on in, it was all Mumbai Indians. Trent Boult got Chris Morris the next over and the bowlers ensured that RCB were restricted to a chase-able total of 164. Bumrah finished with figures of 3-14.

Quinton de Kock and Ishan Kishan got off to a quick start for MI, before Siraj got de Kock for 18. Ishan Kishan was soon to follow, as he holed out off Yuzvendra Chahal's bowling.

Suryakumar, whose exclusion from the India squad to tour Australia raised some questions after yet another good season in the IPL, then took control and played a well-controlled knock, playing some beautiful shots off the likes of Chahal and Dale Steyn.

Even though Saurabh Tiwary (5) and Krunal Pandya (10) fell around him, Suryakumar never slowed down and kept the pressure on RCB.

Yadav hit 10 boundaries and three sixes in his well-paced innings.

While Mumbai Indians, who also have the best Net Run Rate in the league, have all but qualified, RCB will be wary of missing out on qualification after spending the majority of the season after two consecutive defeats sees them in the scrap for the playoff spots.

Their next two fixtures will see them up against SunRisers Hyderabad and Delhi Capitals, both of who are very much in the mix for qualification.

Yuzvendra Chahal Mumbai Indians vs Royal Challengers Bangalore, Match 48 Cricket
Get the latest updates on Fifa Worldcup 2022 and check out  Fifa World Cup Schedule, Stats and Live Cricket Score. Like us on Facebook or follow us on Twitter for more sports updates. You can also download the NDTV Cricket app for Android or iOS.