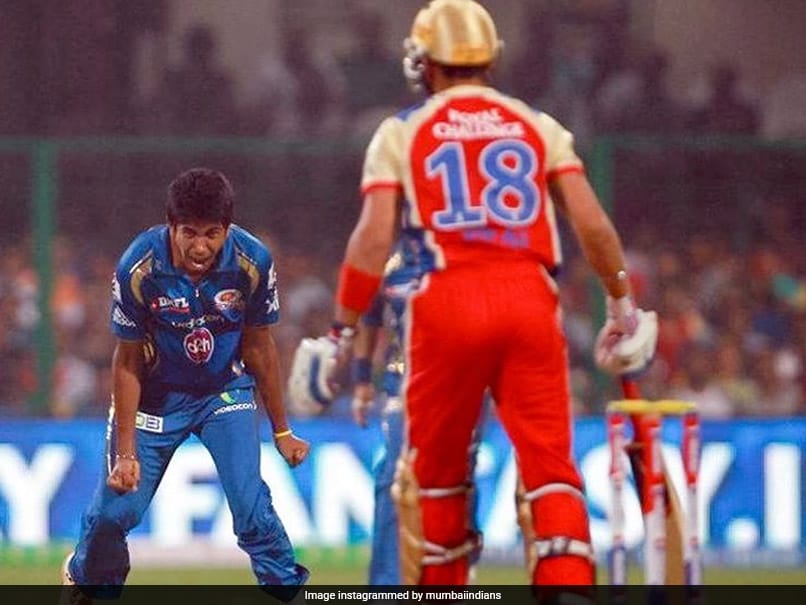 When Jasprit Bumrah dismissed Virat Kohli in Mumbai Indians' clash against Royal Challengers Bangalore on Wednesday in Abu Dhabi, he reached the milestone of 100 wickets in the Indian Premier League (IPL). Incidentally, when Bumrah made his IPL debut in 2013 the first wicket that he picked was also Kohli. Mumbai posted a picture from that clash in 2013 showing a young Bumrah celebrating Kohli's wicket along with similar, though less exuberant, celebratory pic from Wednesday's clash. The "How it started - How it's going" caption captured Bumrah's emphatic IPL journey.

Bumrah's short ball got big on Kohli in Wednesday's clash as the RCB captain top-edged the ball to Saurabh Tiwary at short mid-wicket. He was dismissed for nine runs as RCB lost four wickets for seven runs in the middle overs, with Bumrah accounting for two of them.

The fast bowler finished with figures of 3 for 14 from four overs as RCB were restricted to 164 runs after their openers had added 71 runs in 7.5 overs.

He is Mumbai's highest wicket taker this season with 20 wickets from 12 games and second behind Kagiso Rabada in the race for the Purple Cap.

Kohli, on the other hand, is IPL's all-time leading scorer with 5836 runs from 189 matches. He is also RCB's top scorer this season with 424 runs from 12 matches.

Jasprit Bumrah IPL 2020 Mumbai Indians vs Royal Challengers Bangalore, Match 48 Cricket
Get the latest updates on ICC T20 Worldcup 2022, check out the Schedule and Live Score. Like us on Facebook or follow us on Twitter for more sports updates. You can also download the NDTV Cricket app for Android or iOS.