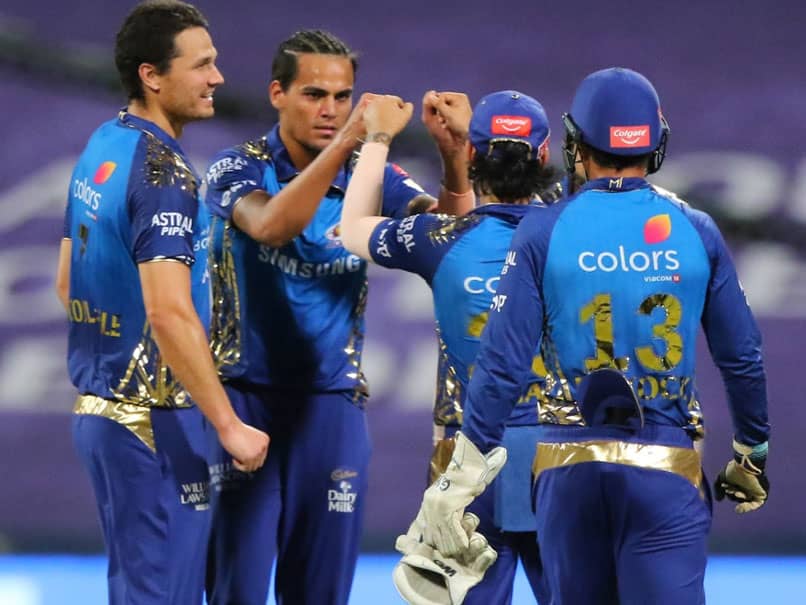 IPL 2020: Mumbai Indians go to the top of the points table with 8-wicket win over KKR.© BCCI/IPL

Mumbai Indians defeated Kolkata Knight Riders by 8 wickets at the Sheikh Zayed Stadium in Abu Dhabi on Friday. The win has taken the Mumbai-based franchise to the top of the points table. Rahul Chahar set up the win with an economic spell of two for 18 from his four overs and then Quinton de Kock batted KKR out of the game with his 13th Indian Premier League half-century as he remained unbeaten on 78. KKR, who took the field under their new captain Eoin Morgan, never got going with the bat after winning the toss.

Trent Boult, Jasprit Burmrah and Rahul Chahar made sure that Mumbai get wickets at regular intervals.

Boult, Bumrah and Nathan Coulter-Nile all picked up one wicket apiece.

Coulter-Nile was taken to the cleaners by Eoin Morgan and Pat Cummins in the 20th over as he gave away 21 runs.

In reply, Rohit Sharma and Quinton de Kock got Mumbai off to a flying start. The openers scored 51 runs in the powerplay and carried on to put 94 runs for the first wicket.

Rohit Sharma scored 35 off 36 deliveries in an innings comprising of five boundaries and a six. Shivam Mavi sent him back with an out-swinger as the MI skipper edged one straight to Dinesh Karthik behind the stumps.

Varun Chakravarthy got one past Suryakumar Yadav as he chopped a sweep shot onto his stumps.

Hardik Pandya then swung his bat around and remained unbeaten on 21 off just 11 balls as Mumbai registered a comfortable win.

Mumbai now have 12 points from eight games, same as Delhi Capitals but a better net run-rate sees them sit on top of the points table.

KKR stay at the fourth spot but this heavy defeat has taken a toll on their net run-rate and they are now in danger of sliding down the points table.

Quinton de Kock Rahul Chahar IPL 2020 Cricket Mumbai Indians vs Kolkata Knight Riders, Match 32
Get the latest updates on IPL 2021, IPL Points Table , IPL Schedule 2021 , live score . Like us on Facebook or follow us on Twitter for more sports updates. You can also download the NDTV Cricket app for Android or iOS.