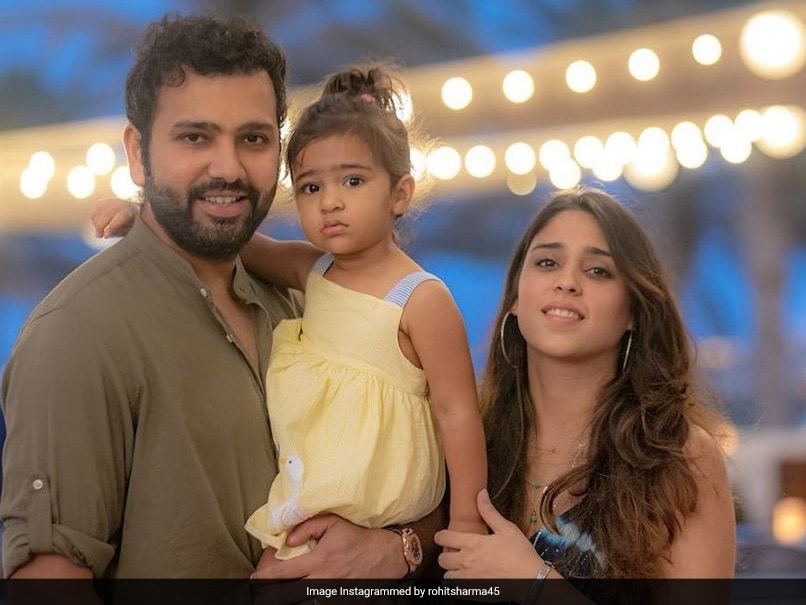 Rohit Sharma posted a wholesome picture with wife Ritika Sajdeh and their daughter Samaira on Instagram and captioned it with ‘family' emojis. The three are in the UAE where Rohit is playing the Indian Premier League (IPL) for Mumbai Indians (MI). Mumbai currently sit atop the points table with 10 points from seven matches and next play Kolkata Knight Riders on Friday in Abu Dhabi. Rohit's Mumbai have won five out of their seven matches thus far and have the highest net run rate of all teams (+1.327).

Rohit's Instagram feed has many such pictures with his family. Only recently he had posted an adorable click with Samaira in his arms with a beautiful Dubai sunset in the background.

The family also had a day out at the beach last month before the commencement of the IPL. When not out at the beach, the three are seen huddled together in the bed introducing Samaira to “Jurassic World” on television.

The family time aside, Rohit's IPL has been good for him with the bat as the opening batsman has scored 216 runs at 30.85 and a strike rate of 137.57 with two fifties.

Others have contributed as well, with Suryakumar Yadav, the highest scorer for MI so far, getting 233 runs at an even better strike rate of 155.33 with two fifties.

With the ball, Trent Boult and Jasprit Bumrah are the joint second-highest wicket takers with 11 wickets each while James Pattinson has picked up nine.