IPL 2020, MI vs DC: Mumbai Indians strolled to a comfortable five-wicket win over Delhi Capitals in Abu Dhabi on Sunday. 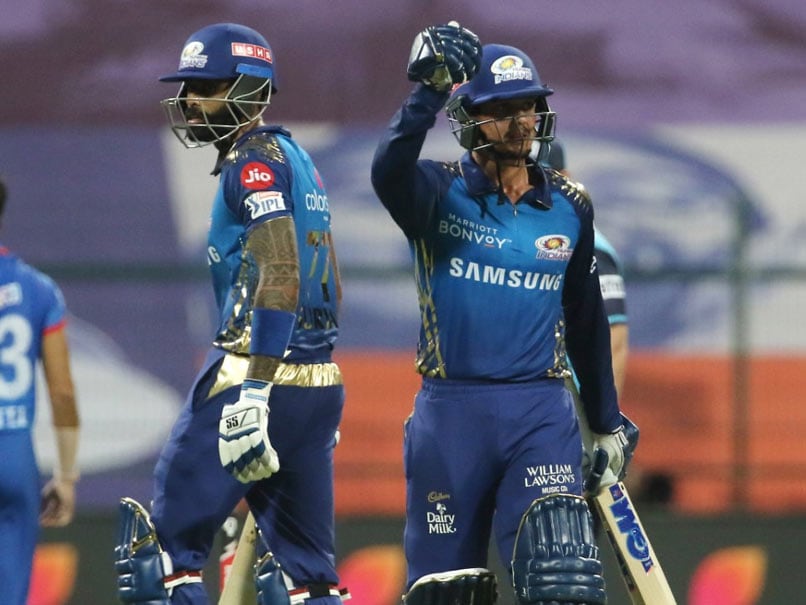 Twin knocks of 53 each by Quinton de Kock and Suryakumar Yadav helped Mumbai Indians (MI) beat Delhi Capitals (DC) and go top of the table in Abu Dhabi on Sunday. Chasing 163 for victory, Mumbai lost skipper Rohit Sharma early for five but a 45-run stand for the second wicket between de Kock and Suryakumar followed by a 53-run partnership between Suryakumar and Ishan Kishan (28) all but secured an easy win for the four-time champions. There were a few hiccups in the end as Delhi struck to dismiss Suryakumar, Kishan and Hardik Pandya (0) in the space of three overs, but the experienced duo of Krunal Pandya (12 not out off 7 balls) and Kieron Pollard (11 not out off 14 balls) ensured Mumbai got home with two balls to spare.

Kishan struck 28 off just 15 with two fours and as many sixes to complement Suryakumar's 53 off 32 as the middle overs brought Delhi only two wickets.

Rohit and de Kock had a cautious start to the innings as they scored 31 off the first five overs before the captain was dismissed by Axar Patel.

That was Patel's only wicket of the innings even as Ravichandran Ashwin and Marcus Stoinis got a wicket each. Kagiso Rabada returned with 2 for 28 off four overs, dismissing Suryakumar and Kishan.

Earlier, Delhi skipper Shreyas Iyer won the toss and opted to bat. Shikhar Dhawan top-scored with 69 not out off 42 balls to anchor the innings even as Iyer (42 off 33) played the supporting act.

Alex Carey, playing in the place of an injured Rishabh Pant, hit 14 not out off 9 at the death along with Stoinis who made 13 off 8.

Krunal returned 2 for 26 for Mumbai while Trent Boult got 1 for 36 from their respective four overs.

With this win, Mumbai strengthened their position at the top of the table with 10 points from seven matches – as many as Delhi, but Mumbai lead the table with a better net run rate.

Kagiso Rabada IPL 2020 Mumbai Indians vs Delhi Capitals, Match 27 Cricket
Get the latest updates on ICC T20 Worldcup 2022 and CWG 2022 check out the Schedule, Live Score and Medals Tally. Like us on Facebook or follow us on Twitter for more sports updates. You can also download the NDTV Cricket app for Android or iOS.