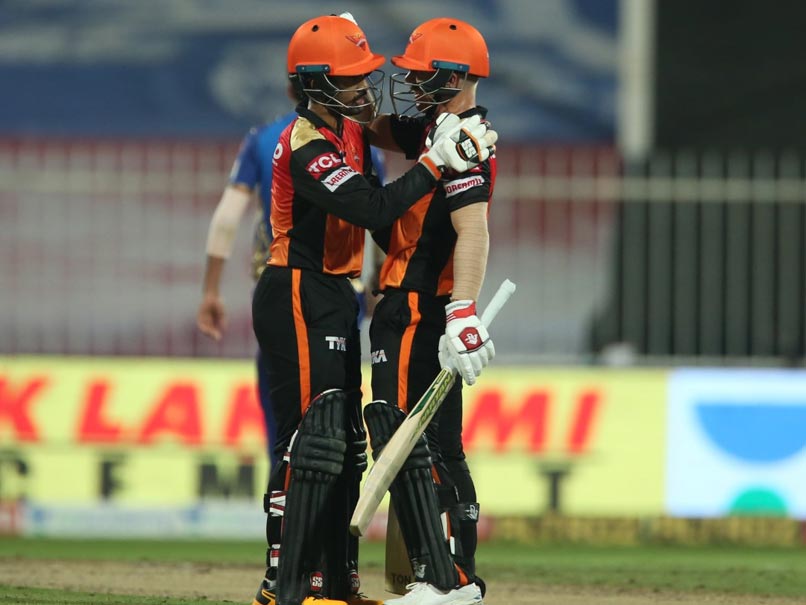 The odds were stacked against SunRisers Hyderabad. Their opponent in a must-win game, also the last in the league stage of Indian Premier League (IPL) 2020, Mumbai Indians, had beaten them comprehensively in the first clash between the sides in the tournament. Despite having a net run rate in the positives, SRH had only 12 points and were placed fifth on the table, just below Kolkata Knight Riders (14 points), who would have been praying for Mumbai, the table toppers, to win tonight. Yet, SRH overcame the odds to upset the most successful team in the tournament thus far, thrashing them by 10 wickets.

SRH were led in every way by the enigmatic David Warner, who smashed an unbeaten 85 off just 58 balls and added an unbroken 151-run stand with Wriddhiman Saha (58 off 45 balls) to make a mockery of Mumbai's 149 for 8.

En route, SRH registered their third win on trot, beating all other teams, incidentally, who have qualified for the playoffs with them, to book a place in the last four.

However, SRH were helped by Mumbai resting some of their key players – Jasprit Bumrah, Trent Boult and Hardik Pandya did not play on Tuesday.

"They rested a few players but to hold them to 150 on this ground was great. A lot of credit goes to the bowlers, (Shahbaz) Nadeem was superb," said Warner after the match.

Nadeem picked up two wickets in the middle overs while Rashid Khan got one wicket as the SRH spinners put a tight leash around the Mumbai batsmen, not allowing them to tee off at any stage.

Then, Warner and Saha did their thing and handed a hiding to the defending IPL champions. Warner hailed the all-round effort by the team that helped make the playoffs for a fifth consecutive time since their title-winning run in 2016.

"We have a never say die attitude and that is how we approach each game. We had a couple of injuries (Bhuvneshwar Kumar and Mitch Marsh were ruled out due to injuries) but they are here in spirit and we are doing it for them," said Warner.

"Kane (Williamson) missed out due to injury last year and Jonny (Bairstow) took his place, and was absolutely fantastic. We looked at 2016, we were in the same situation where we had to win every game to win the title."

And they beat Royal Challengers Bangalore in the 2016 final, their opponents for the Eliminator on November 6.

"RCB are a great team, very well led by Virat. They have a lot of danger in their side. We beat them in the final in 2016 and I am excited for the challenge in a do or die game," said Warner about the upcoming knockout clash.

"We knew dew was going to play a factor and we wanted to take the toss out of consideration, but we didn't play good cricket today," Rohit lamented after the match.

This was Rohit's return to the Mumbai XI after missing four games due to a hamstring injury. Although he didn't get going with the bat, he was dismissed for four runs, the comeback to field made him happy.

"I was happy to be back, it's been a while. I'm looking forward to play few more games here, let's see what happens. It (hamstring) is fine, absolutely," said Rohit.

Hailing the Warner-Saha show that took the game away from his team, Rohit added: "They played good shots in the powerplay, and that helped them. If you take wickets in the Powerplay, even if there is dew, it can put pressure on the opposition."

Rohit Sharma IPL 2020 Sunrisers Hyderabad vs Mumbai Indians, Match 56 Cricket
Get the latest updates on India vs South Africa and check out  Schedule, Results and Live Score. Like us on Facebook or follow us on Twitter for more sports updates. You can also download the NDTV Cricket app for Android or iOS.