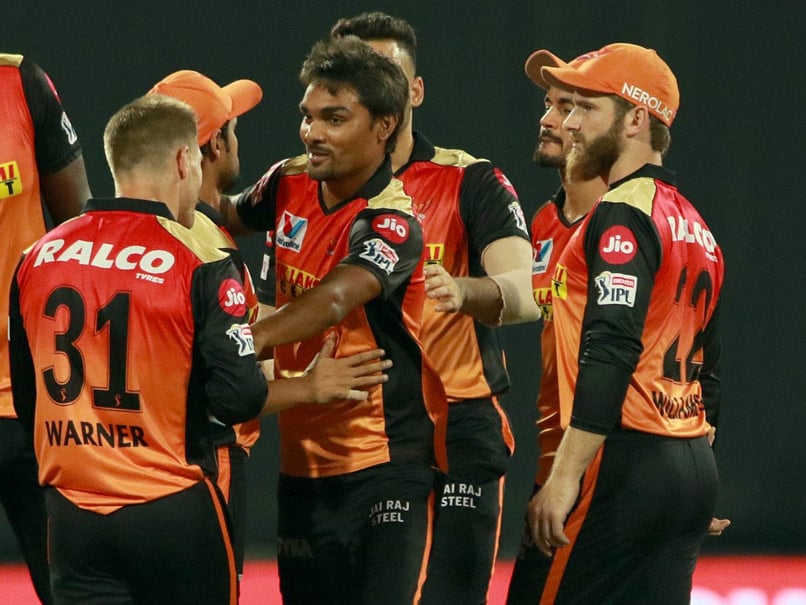 A clinical SunRisers Hyderabad outclassed defending champions Mumbai Indians by 10 wickets in the final league game of IPL 2020to book a place in the knock-out stage. With this win, David Warner's side knocked out Eoin Morgan's Kolkata Knight Riders on the basis of their Net Run-Rate (NRR) after finishing with same number of 14 points. They will now face Virat Kohli's Royal Challengers Bangalore (RCB) in the Eliminator. After Warner elected to bowl, SRH bowlers once again produced their A-game, restricting Mumbai Indians to a below-par 149/8. Warner and Wriddhiman Saha continued their electric form at the top the order and made a mockery of Mumbai Indians' bowling which looked rather ordinary in absence of their pace spearhead Jasprit Bumrah and Trent Boult, who were given a much-needed rest ahead of crucial knockout game. Warner finished with 85 not out off just 58 balls, while Saha scored an unbeaten 45-ball 58 as the duo chased down the total with 17 balls left.

Earlier, Mumbai Indians were all smiles as they saw their regular skipper Rohit Sharma walking down at the toss. However, he failed to create any magic and departed for four runs after handing a simple catch to the mid-off fielder.

After Rohit's departure, Quinton de Kock took charge and hit a a few good boundaries but failed to carry on for long and was cleaned up by Sandeep Sharma in the fifth over.

After dominating the Powerplay, SRH spinners came to the party in the middle phase and made run-scoring difficult for Mumbai Indian batters.

Batting as per team's need, Suryakumar Yadav and Ishan Kishan focused on stitching a solid partnership rather than playing big shots, which allowed SRH bowlers to take control of the game. To their credit, they did manage to take their team out of trouble by adding 42 runs.

However, in what was their worst batting performance of the season, the record IPL champions slumped from 81/2 to 116/7. Despite that, Kieron Pollard's (41 off 25 balls) late flourish at the death took them to a respectable total of 149/8, giving his bowlers something to fight with.

Sandeep Sharma continued his good form and picked up three wickets for 34, while Jason Holder and Shahbaz Nadeem bowled economical spells and returned with two wickets each.

This was Hyderabad's third win in a row and they are the most in-form team going into the knockout stage. Their superior NRR also meant they pipped RCB to finish third on the IPL 2020 Points Table.

Kieron Pollard Sharjah Cricket Association Stadium, Sharjah IPL 2020 Cricket Sunrisers Hyderabad vs Mumbai Indians, Match 56
Get the latest updates on ICC T20 Worldcup 2022, check out the Schedule and Live Score. Like us on Facebook or follow us on Twitter for more sports updates. You can also download the NDTV Cricket app for Android or iOS.