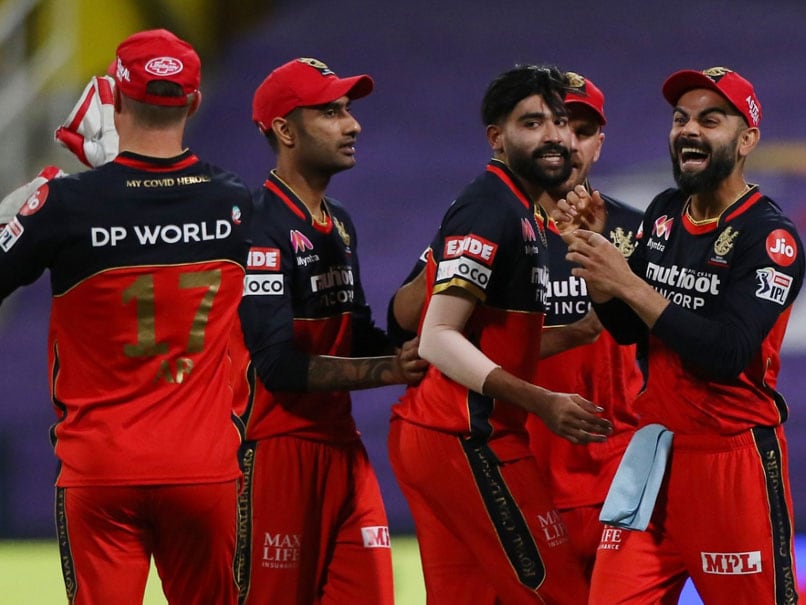 Kolkata Knight Riders sunk to a humiliating eight-wicket defeat to Royal Challengers Bangalore in Abu Dhabi on Wednesday where KKR were restricted to 84 for 8 in their 20 overs – the lowest team total with wickets in hand in the history of Indian Premier League (IPL). KKR were blown away by RCB pacer Mohammed Siraj who, in a searing spell of fast bowling with the new ball, delivered two wicket-maidens in consecutive overs and returned figures of 3-2-2-3 in his first spell. In reply, RCB had little trouble in chasing down the paltry total as they cruised to victory with 6.3 overs to spare.

KKR captain Eoin Morgan won the toss and elected to bat but the batsmen were jolted right from the second over of the match when Siraj got opener Rahul Tripathi (1) caught behind.

Nitish Rana (0) was clean bowled on the very next ball and although Tom Banton (10) kept at bay the hat-trick ball, he was soon sent packing by Siraj as Banton, too, edged it behind to AB de Villiers.

Navdeep Saini sent back the other opener and one of KKR's in-form batsman Shubman Gill (1) and when Yuzvendra Chahal trapped Dinesh Karthik (4) lbw, KKR were in all sorts of trouble at 32 for 5.

Their trouble compounded when Pat Cummins (4) became Chahal's second wicket, holing out to Devdutt Padikkal, to leave KKR tottering at 40 for 6.

Morgan saved some grace with 30 off 34 balls but he perished in the last five in an attempt to up the ante with no recognised batsman left at the other end – Andre Russell didn't make the playing XI due to injury.

The RCB reply was swift. Openers Padikkal (25) and Aaron Finch (16) added 46 for the first wicket in 6.2 overs before Finch was caught by Karthik off Lockie Ferguson.

Padikkal was run out in the same over but captain Virat Kohli (18 not out) and Gurkeerat Mann (21 not out) ensured RCB suffered no more hiccups and cruised to victory in 13.3 overs.

On a day that belonged to the RCB bowlers, Siraj was the best of the lot with final figures of 4-2-8-3. His two consecutive maidens was the first time in IPL that any bowler had bowled two maidens in the same match.

Chahal returned 2 for 15 while Washington Sundar and Saini got a wicket apiece.

With this win RCB climbed to the second spot in the table with 14 points after 10 games while KKR remained fourth with 10 points.