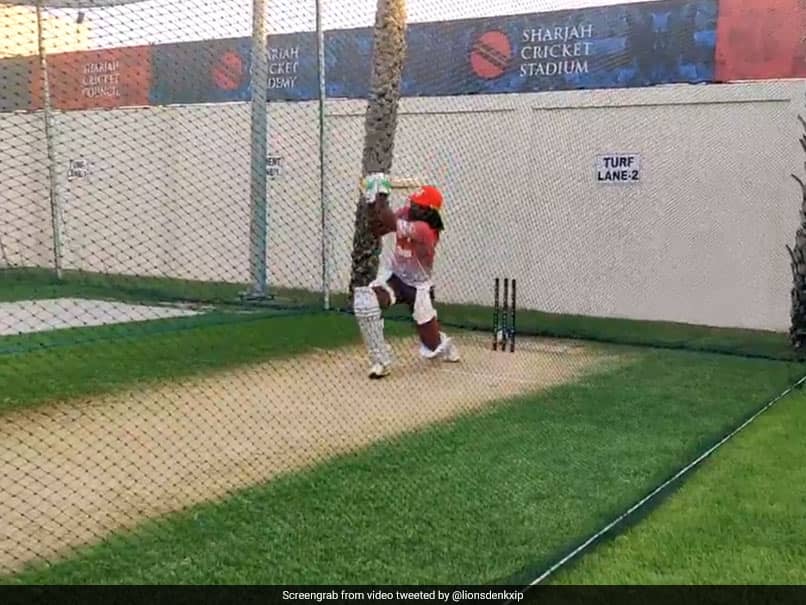 Chris Gayle was seen sweating it out in the nets.© Twitter

Kings XI Punjab (KXIP) opener Chris Gayle was seen sweating it out in the nets, in a video posted by the franchise's official Twitter handle. KXIP expressed their excitement as the big-hitting Jamaican adopted an aggressive approach. "Beast mode activated," read the caption on the video. KXIP have been training for the upcoming edition of the Indian Premier League (IPL), having completed the mandatory quarantine as per the government of the UAE and Indian Premier League (IPL) SOP guidelines. Chennai Super Kings (CSK) are the only franchise yet to start practising.

Gayle seems to be in high spirits recently as observed in a picture shared by the franchise's official Twitter handle. The 40-year-old can be seen sporting a big smile, in the image. Gayle is renowned for his big-hitting prowess having smashed the highest number of sixes in the history of the IPL.

The big-hitting opener has hit 326 sixes so far, with Royal Challengers Bangalore (RCB) batsman AB de Villiers on the second spot having smashed 212 sixes. Gayle further enjoys the distinction of having registered the highest score in an innings in the IPL, following his unbeaten 175 off 66 deliveries against the Pune Warriors India back in 2013.

The 40-year-old scored 490 runs in 13 innings for KXIP in the previous edition of the IPL, finishing sixth on the list of the top run-scorers. The franchise will be led by newly-appointed skipper KL Rahul, who replaces Ravichandran Ashwin.

The 13th edition of the IPL will be played in UAE, with the tournament set to start from September 19.