"Zak Is Back": Zaheer Khan Turns Back The Clock At Mumbai Indians Nets With Perfect Bowling Action

Zaheer Khan is the Mumbai Indians Director of Cricket Operations. Mahela Jayawardene, Robin Singh and Shane Bond are also with the Mumbai franchise. 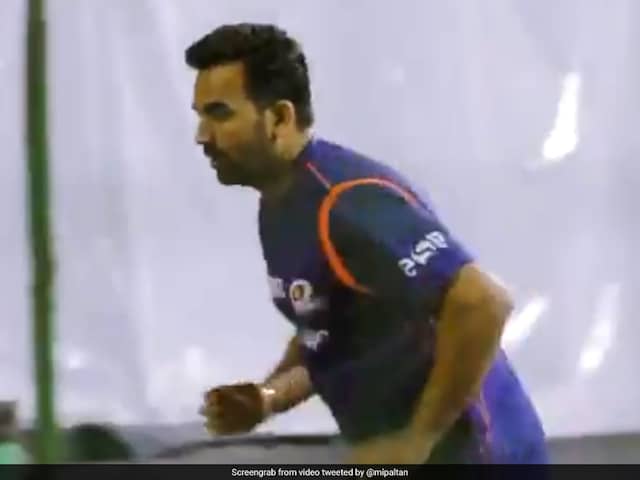 Zaheer Khan steaming in to bowl, one of the most inspiring sights in Indian cricket for one and a half decades since the left arm seamer's international debut in 2000, is a sight which can now sometimes be seen in the Mumbai Indian training camp. The 40-year-old, now the Director of Cricket Operations at the Mumbai-based Indian Premier League (IPL) franchise, is seen rolling back the years with the same perfect bowling action in a video tweeted by Mumbai Indians on Thursday.

The years have not taken away any of the smoothness of Zaheer Khan's run-up, the subtlety of the moment when he shifts the ball from the palm of his right hand to his left, the liveliness of the jump before the delivery and the elegance of his delivery posture.

Barinder Sran and Shane Bond are seen nodding approvingly in the video as Zaheer Khan completes a delivery.

Mumbai Indians face Delhi Capitals at the Feroz Shah Kotla in New Delhi on Thursday, with second spot on the IPL points table on the line. Both teams are on 10 points from eight matches, with DC ahead on net run rate. With the final part of the IPL season approaching, the winners of Thursday's match will put themselves in a comfortable position to finish among the playoff spots.

Zaheer Khan IPL 2019 Cricket
Get the latest Cricket news, check out the India cricket schedule, Cricket live score . Like us on Facebook or follow us on Twitter for more sports updates. You can also download the NDTV Cricket app for Android or iOS.