Ben Stokes, Ravindra Jadeja Both Hit The Deck In "Crazy" Incident. See Who Comes Out On Top

The last over from Ben Stokes during CSK's chase will be remembered for MS Dhoni storming onto the field but it witnessed another "crazy" incident. 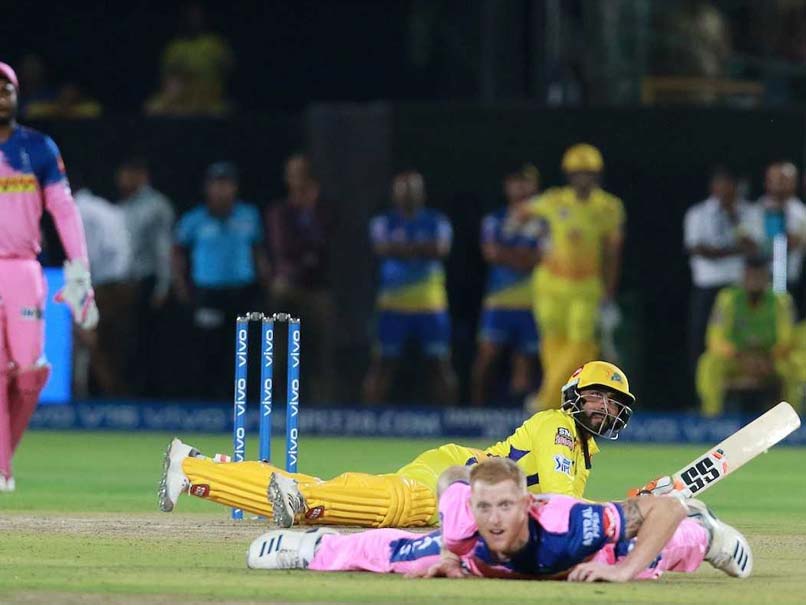 Ravindra Jadeja and Ben Stokes both found themselves flat on the deck in the last over of the match.© BCCI/IPL

The RR vs CSK IPL 2019 clash went right down to the wire with the match witnessing some controversial moments. The last over from Ben Stokes during Chennai Super Kings' chase will be remembered for MS Dhoni storming onto the field to protest against the umpires for not signalling a no-ball. However, the infamous last over from Ben Stokes saw another "crazy" incident that got the fans talking on social media. With CSK needing 18 off the final over, Stokes and Ravindra Jadeja both found themselves flat on the deck on the first ball for different reasons.

Ben Stokes pitched his first delivery of the last over full and wide. Ravindra Jadeja cleared his front leg but had to extend to reach the ball. The left-hander fell over but still managed to connect with the ball.

While both players hit the deck, only one came out on top:

Fans on Twitter hailed Jadeja for pulling off a "crazy" shot.

You dont see such images in cricket very often. Even Dhoni reacted to this ludicrous Jadeja shot off Ben Stokes. Crazy finish to end off the match#RRvCSK #IPL2019 pic.twitter.com/14WGjWL5xy

There were so many strange things in that 1 over FFS . That Jadeja six was crazy . That no ball is the first time in a long time I have seen a no ball when they didn't show a replay . Then the other no ball . Dhoni being an absolute idiot and then Stokes being stokes

Jadeja's six was crucial to CSK's cause as it brought the equation down to 12 off five balls.

Despite losing MS Dhoni on the third ball, CSK got over the line thanks to a match-winning cameo from Mitchell Santner, who hit the last ball for a six with his team needing three runs to win.

MS Dhoni had led from the front and scored a match-winning half-century as CSK registered a four-wicket win.

Ravindra Jadeja IPL 2019 Rajasthan Royals vs Chennai Super Kings, Match 25 Cricket
Get the latest updates on IND vs NZ 2021, check out the Schedule and Live Score . Like us on Facebook or follow us on Twitter for more sports updates. You can also download the NDTV Cricket app for Android or iOS.