After the RCB vs SRH IPL 2019 clash in Bengaluru, Virat Kohli was seen having some fun at Khaleel Ahmed's expense. 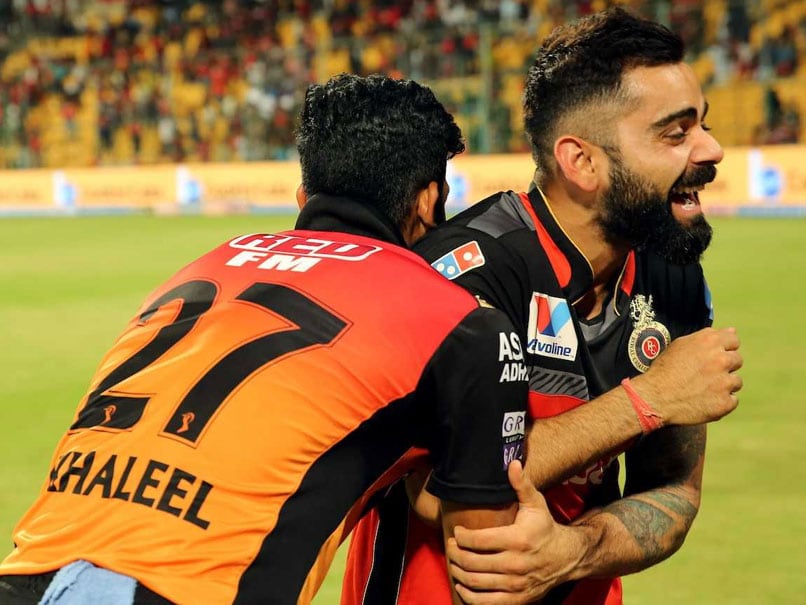 Virat Kohli yet again failed to make a contribution with the bat as Khaleel Ahmed sent him packing in the second over but, for a change, despite the batting failures of Kohli and AB de Villiers, RCB managed to register a rare win in IPL 2019. Victory seemed in RCB's last game of IPL 2019 seemed to put Virat Kohli in good spirits and after the match Virat Kohli was seen having some fun at Khaleel Ahmed's expense. The SRH pacer celebrated wildly after dismissing Virat Kohli, also making a weird hand gesture.

Here is a small clip of Khaleel Ahmed's wicket celebration and notice the hand gesture right at the end.

That moment when you get the key wicket of Virat Kohli.

After the match, Virat Kohli, standing along side Khaleel Ahmed, mocked his wicket celebration by reenacting the hand gesture. Both players broke into laughter after Kohli's impersonation.

Virat Kohli's RCB signed off in style, winning their last match this season by four wickets at the M.Chinnaswamy Stadium in Bengaluru on Saturday night.

In the process, RCB, who were out of playoff contention a while back, also ended up denting SRH's hopes of reaching the last four.

RCB's win means that SRH will have to rely on Mumbai Indians beating Kolkata Knight Riders (KKR) on Sunday to make it to the playoffs. Anything besides a Mumbai Indians win will spell doom for the Hyderabad outfit and see KKR secure the coveted spot.

Both Hetmyer and Gurkeerat hit blazing fifties as RCB recovered from a hopelessly placed 20 for three in the third over to reach the 176-run target with four balls to spare.

Virat Kohli Khaleel Ahmed IPL 2019 Royal Challengers Bangalore vs Sunrisers Hyderabad, Match 54 Cricket
Get the latest updates on T20 World Cup, check out the T20 World Cup Schedule and Live Score . Like us on Facebook or follow us on Twitter for more sports updates. You can also download the NDTV Cricket app for Android or iOS.