AB de Villiers cracked 82 not out off 44 balls as Royal Challengers Bangalore beat Kings XI Punjab for another crucial victory. 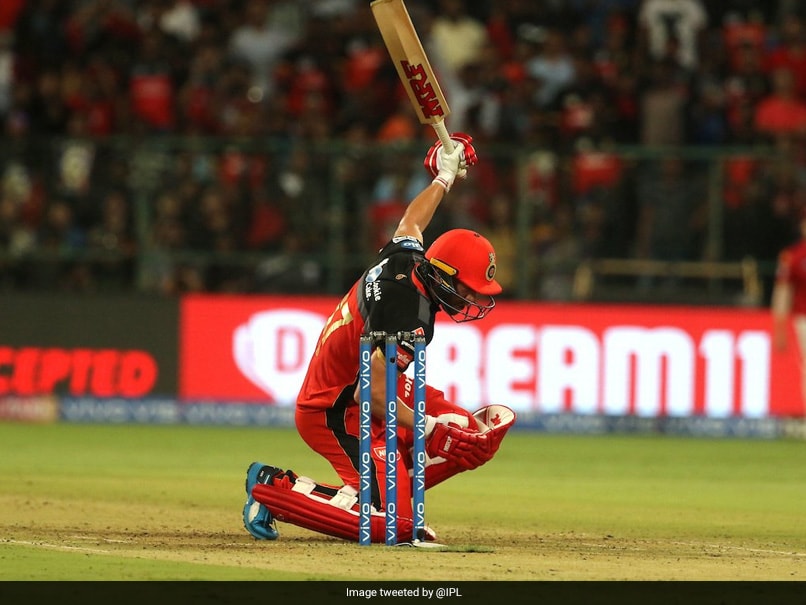 AB de Villiers was at his big-hitting best as he smashed seven sixes and three fours.© Screengrab: www.iplt20.com

Royal Challengers Bangalore's (RCB) AB de Villiers and Marcus Stoinis combined forces to punish the Kings XI Punjab (KXIP) bowlers during their Indian Premier League (IPL) 2019 clash in Bengaluru on Wednesday. AB de Villiers was at his big-hitting best as he smashed seven sixes and three fours during his unbeaten knock of 82 off 44 deliveries. Although De Villiers' one-hour-22-minute madness was a treat to watch, the six off the fifth delivery of the penultimate over was a jaw-dropper. Mohammed Shami bowled an above-waist full toss and surprised by the height, the batsman took his eyes off the ball. Even though AB de Villiers took one hand off the bat and turned his head at the moment of impact, the ball flew over backward square-leg and landed on the roof of the stadium.

WATCH: One handed, out of the ground - AB style

Put in to bat, RCB lost skipper Virat Kohli in the fourth over.

"We won four out of the last five we have played, it could have been five out of five," RCB skipper Virat Kohli said after the match.

"We are just looking to enjoy our cricket. Tonight was another example of having fun. The partnership of ABD and Stoinis changed the match for us. At one stage we thought 175 were good but AB and Marcus got us past 200. The way they played was the deciding factor," Kohli added.

AB de Villiers IPL 2019 Cricket Royal Challengers Bangalore vs Kings XI Punjab, Match 42
Get the latest updates on ICC Women's Cricket World Cup 2022 and IPL 2022, check out the Schedule , Live Score and IPL Points Table. Like us on Facebook or follow us on Twitter for more sports updates. You can also download the NDTV Cricket app for Android or iOS.