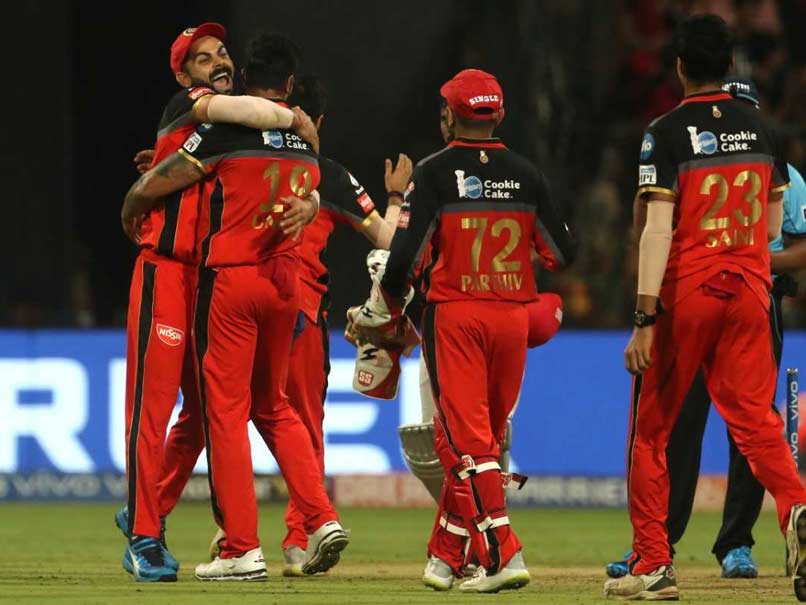 Navdeep Saini's fabulous penultimate over kept Royal Challengers Bangalore afloat as they beat Kings XI Punjab by 17 runs in an Indian Premier League encounter here Wednesday. AB de Villiers' unbeaten 82 off 44 balls took RCB to a healthy 202 for 4 and things could have gone awry with young Nicholas Pooran (46 off 28 balls) hitting five sixes at the rear before Saini sealed it in the 19th over. Kings XI Punjab finished at 185 for 7 as RCB are now on eight points with three games left.

Needing 30 off the last two, Saini (2/33), who is one of India's fastest bowlers produced a hostile over in which he removed the dangerous David Miller and Pooran but more importantly gave away only three runs. Saini bowled fast and into the body of the batsmen, who couldn't really get going and his aggression became the defining factor in the end.

Defending 27 runs off the final over, Umesh Yadav (3/33) was better than the other night against CSK as he got a couple of wickets. With four wins in the last five games, RCB will hope to win the remaining three and expect a few favourable result to make it to the playoffs as rank outsiders.

Kings XI Punjab started the chase in earnest as KL Rahul (42 off 27 balls) and Chris Gayle (23 off 10 balls) added 42 in less than four overs to set the ball rolling. Mayank Agarwal (35 off 21 balls) continued the flurry of fours during his 59-run stand with Rahul. Rahul and Mayank were out in quick succession before Pooran and David Miller (24) took charge with some lusty hitting added 68 off 8 overs as it boiled down to 30 off the final two overs.

However, both Saini and Umesh did well to get another two points for the RCB. Earlier, AB de Villiers' scintillating half-century and a 121-run stand with Marcus Stoinis propelled Royal Challengers Bangalore to 202 for four after being put into bat.

After reaching his 50 off 35 balls, De Villiers, smashed Shami for three sixes, plundering 18 runs in the penultimate over. In the last over, both Stoinis and De Villiers hammered 27 runs off Viljoen, which helped the hosts to race past 200 runs mark. Put into bat, opener Parthiv (43 off 24 balls) and Virat Kohli gave a rollicking start getting 35 runs on board in 18 balls but RCB captain was dismissed by Shami after he was caught by Mandeep Singh at extra cover.

The wicket-keeper batsman did not last long as he was caught by Ravichandran Ashwin off Murugan Ashwin after he had smashed seven 4s and two sixes. Looking good at 71 for 2 in 38 balls, RCB lost two quick wickets of Moeen Ali (4) and Akashdeep Nath (3), leaving RCB at the crossroads way 81 for 4. De Villiers brought up the fifty runs partnership for the fifth wicket with Stoinis with a mighty six over deep mid-wicket off Murugan.

M.Chinnaswamy Stadium, Bengaluru
Get the latest updates on ICC T20 Worldcup 2022, check out the Schedule and Live Score. Like us on Facebook or follow us on Twitter for more sports updates. You can also download the NDTV Cricket app for Android or iOS.