While CSK are getting the job done on the field, Ziva Dhoni is winning hearts off it. 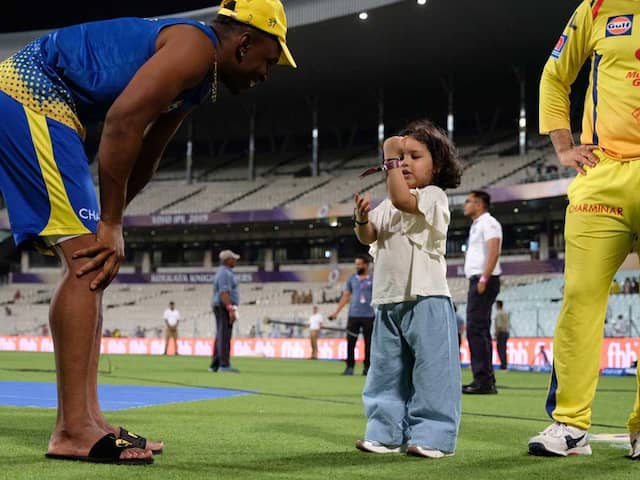 MS Dhoni and his CSK team are endearing themselves to fans with their on-field performances in IPL 2019 but the responsibility of winning hearts off the field seems to be resting on the young shoulders of Ziva Dhoni. MS Dhoni's adorable daughter has been a constant this season, travelling across the country with the team. She was present at the Eden Gardens as the Chennai Super Kings beat KKR to register their fourth straight win and go four points clear of second-placed Delhi Capitals in the IPL Points Table.

CSK might have got the job done on the field but a certain Dhoni wasn't finished just yet.

After CSK's thrilling win over KKR, Ziva Dhoni was seen giving a lesson to Dwayne Bravo on the correct way to wear a cap. CSK's official Twitter handle posted a clip of the adorable video that has since gone viral.

CSK, meanwhile, consolidated their position at the top the table with 14 points and one more win will virtually seal their spot in play-offs.

Suresh Raina and Imran Tahir were the heroes for the Chennai outfit in Kolkata. Raina scored a half-century and shared a match-winning stand with Ravindra Jadeja, who contributed with a fearless 17-ball 31.

Imran Tahir, on the other hand, claimed his IPL-best figures of 4/27 to help CSK restrict KKR to a 161 for eight in their allotted 20 overs.

The visitors chased down the target with two balls to spare, with Suresh Raina unbeaten on 58 and Ravindra Jadeja not out on 31.

This was CSK's first win at the Eden Gardens since 2013 as they did a double on KKR who suffered a hat-trick of defeats for the first time since 2014 and set to slip out of their second place in the table.

Dwayne Bravo Cricket
Get the latest Cricket news, check out the India cricket schedule, Cricket live score . Like us on Facebook or follow us on Twitter for more sports updates. You can also download the NDTV Cricket app for Android or iOS.