Watch: MS Dhoni Hits Ravindra Jadeja On The Head With His Bat After "Ludicrous" Six 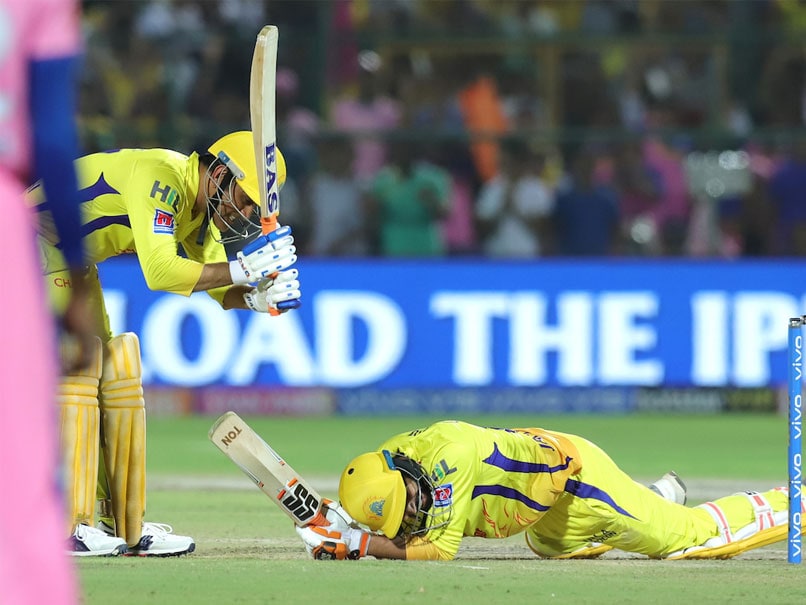 MS Dhoni starred with the bat as Chennai Super Kings beat Rajasthan Royals by four wickets to open up a four-point gap at the top of the IPL Points Table. The drama-filled IPL 2019 encounter at the Sawai Mansingh Stadium in Jaipur will forever be remembered for MS Dhoni losing his cool and entering the field to protest against an umpiring decision. But another incident captured the imagination of fans around the world -- Ravindra Jadeja's mindboggling six. The CSK all-rounder managed to get a proper connection despite falling over and landing up on the deck.

As Jadeja lay on the ground -- probably figuring out how he managed to pull the shot off -- an ecstatic Dhoni walked up to him and did something extremely bizarre.

You don't see such images in cricket very often. Even Dhoni reacted to this ludicrous Jadeja shot off Ben Stokes. Crazy finish to end off the match#RRvCSK #IPL2019 pic.twitter.com/14WGjWL5xy

The win in Jaipur helped MS Dhoni become the first captain in the history of IPL to win 100 matches. MS Dhoni has won 29 more matches than Gautam Gambhir, who is second on the list.

CSK recorded their sixth win in seven games as they made a rough weather of a modest 152 run target before Mitchell Santner's six sealed in a dramatic final over in which CSK needed 18 runs.

CSK top the IPL table with 12 points, having won six out of the seven matches they have played. Kolkata Knight Riders are second with eight points but have played a game less than CSK.

Mumbai Indian and Kings XI Punjab also have eight points and occupy third and fourth spot in the table respectively.