Kieron Pollard was visibly annoyed as a wide-ball decision didn't go his way in the MI vs CSK IPL 2019 final. 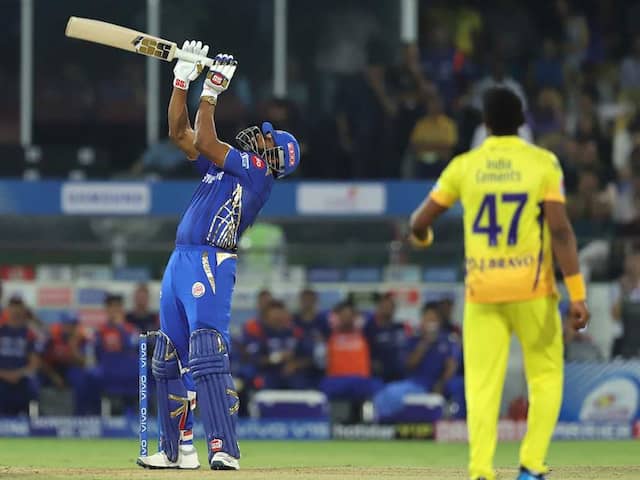 Kieron Pollard threw his bat in the air in frustration after a decision didn't go his way.© BCCI/IPL

Mumbai Indians star Kieron Pollard has been fined 25 per cent of his match fee for showing dissent at an on-field umpiring decision during the MI vs CSK IPL 2019 final at the Rajiv Gandhi International Stadium in Hyderabad on Sunday night. Kieron Pollard, who top-scored for Mumbai Indians with unbeaten 41 runs as the team managed a respectable total of 149 for eight in 20 overs, threw his bat up in air and took the strike at tramlines before walking across further to leave the pitch after a wide-ball decision didn't go his way.

Kieron Pollard, who turned 32 on Sunday, was visibly annoyed by an umpiring howler and came up with own way to deal with the problem.

In the final over, Dwayne Bravo bowled two consecutive deliveries wide outside the tramlines. While Kieron Pollard walked across to play the first ball, he let the other ball go despite not moving across.

On-field umpire Nitin Menon deemed both the deliveries to be legal which infuriated Kieron Pollard, who ended up throwing his bat in the air to show his annoyance.

Both the on-field umpires, Menon and Ian Gould, then had a chat with Pollard who went on to his normal stance and completed the innings, taking Mumbai to 149/8 which they successfully defended to lift their fourth IPL trophy.

Following the end of the thrilling IPL final, which Mumbai Indians won by one run, IPL released a statement.

"Kieron Pollard, the Mumbai Indians all-rounder, was fined 25% of his match fee for showing dissent at an Umpire's decision during the VIVO Indian Premier League (IPL) 2019 Final in Hyderabad. Mr Pollard admitted to the Level 1 offence 2.8 of the IPL Code of Conduct for Players and Team Officials and accepted the sanction," read the IPL statement.

"For Level 1 breaches of the IPL Code of Conduct, the Match Referee's decision is final and binding."

Dwayne Bravo IPL 2019 Mumbai Indians vs Chennai Super Kings, Final Cricket
Get the latest Cricket news, check out the India cricket schedule, Cricket live score . Like us on Facebook or follow us on Twitter for more sports updates. You can also download the NDTV Cricket app for Android or iOS.