MS Dhoni's stay at the crease was brought to a premature end courtesy a rocket throw from Mumbai Indians' Ishan Kishan. 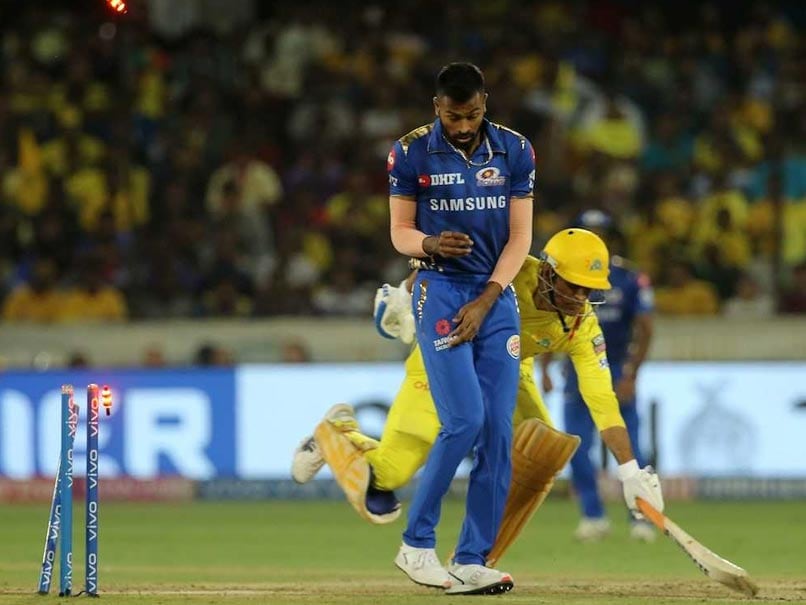 MS Dhoni was given out by third umpire Nigel Llong.© BCCI/IPL

Mumbai Indians beat Chennai Super Kings by a solitary run to clinch a record fourth Indian Premier League (IPL) title on Sunday night. But the MI vs CSK IPL 2019 final was not short of some controversial moments -- the biggest being MS Dhoni's game-changing run out. The CSK skipper came into bat with Shane Watson going great guns at the other end but steadily running out of partners. The need of the hour for CSK was what MS Dhoni does best -- bat patiently and chase the total down one run at a time. MS Dhoni made his usual slow start to the innings but after scoring just 2 runs, his stay at the crease was brought to a premature end courtesy a rocket throw from Mumbai Indians' Ishan Kishan.

However, what followed next was the nerviest few minutes for both sets of fans. As the on-field umpire signalled for the third umpire, replays started playing on TV screens. Nigel Llong, the third umpire, must have immediately known he had a task on his hands and further viewing of replays from different angles only served to increase the confusion.

See for yourself and decide. Was MS Dhoni out or not out?

MS Dhoni run-out! Out or Not out? https://t.co/dkrfpPHQ2V via @ipl

While commentator Sanjay Manjrekar, based on one angle, vehemently called for MS Dhoni to be given out, other commentators were not so sure and thought the benefit of the doubt and the inconclusive nature of the replays would see the third umpire rule in the batsman's favour.

But it wasn't to be for Chennai and their fans as MS Dhoni was given out as Mumbai Indians sniffed a way back into the game.

After the match many CSK fans took to Twitter to vent their anger at the third umpire's decision even as some defended the dismissal.

Again bad decision for run out in @IPL third umpire waits for money to be credited in his account before giving @msdhoni out.
This is not @IPL . This is league between money (@mipaltan ) and best and in the end money wins over best.
Always a @msdhoni @ChennaiIPL fan.

#IPL2019Final #MIvCSK is 110%fixed.I feel sorry for the stupid people debating @msdhoni 's run out. @ShaneRWatson33 threw away his wicket in the end, and @imShard sent instead of @harbhajan_singh ,who is a better batsman. What a waste of 5 hours #CSKvMI #MumbaiIndians

I ask all people msdhoni was run out yes or no
I say not out kiyoki muskil dissison bestman ke paksh me jana chaiye pic.twitter.com/u5Z8iV28os

@msdhoni @ChennaiIPL these two are always gives us what a fan wants... Still that Run out was questionable...But we are always with them... For us @ChennaiIPL @msdhoni won the cup..More then that it's always win our heart. @msdhoni always love u @IPL @ChennaiIPL #Yellove #CSKvMI pic.twitter.com/83u9AOaN1Y

@msdhoni was not run out, bad umpiring lost d match 4 CSK. And raina lost d game for us. Raina should retire from ipl now, becoming burden for CSK.

Run out of @msdhoni was controversial. Benefits of doubt must be for Batsman. Out was not clear.

The run out decision given to @msdhoni is definitely a controversial one and will be in the fan's minds for some time. Such a poor decision by Nigel Long despite of taking that much time. Benefit of doubt rule is probably forgotten or Opted out. #IPLFinal2019 #CSKvMI

#IPL2019Final #MIvCSK
DHONI run-out which was not a run-out even commentators were also saying
Congratulations #ambani family for buying another trophy...
You play hard #csk
But Mukesh ambani play (pay) harder@ChennaiIPL @msdhonipic.twitter.com/P0a2DC6FDP

Except for @sanjaymanjrekar no one in entire commentary team and two teams that were playing were convinced of @msdhoni run out. @sanjaymanjrekar was convinced in one shot alone. May be he should be ambassador of @mipaltan #cskvsmi #IPL2019Final

Disappointed Dhoni didn't race out to remonstrate with the ump. #IPL

I love how passionate some fans are about our sport. I have huge respect for MS but how anyone could see the below photo and say it's not out truly astounds mepic.twitter.com/Mg9fe5h9I9

After Shane Watson had hit a fierce 80, CSK needed two runs off the final ball to overtake Mumbai Indians' 149/8 but Sri Lankan Lasith Malinga dismissed Shardul Thakur with a perfect yorker to claim the landmark win.

Windies all-rounder Kieron Pollard smashed an unbeaten 41 off 25 balls to set up what turned out to be the winning total for Mumbai Indians.

Mumbai Indians IPL 2019 Mumbai Indians vs Chennai Super Kings, Final Cricket
Get the latest updates on IPL 2021, check out the IPL 2021 Schedule and Indian Premier League Live Score . Like us on Facebook or follow us on Twitter for more sports updates. You can also download the NDTV Cricket app for Android or iOS.