Chennai Super Kings needed nine runs off six balls but Lasith Malinga gave only seven runs in the final over. 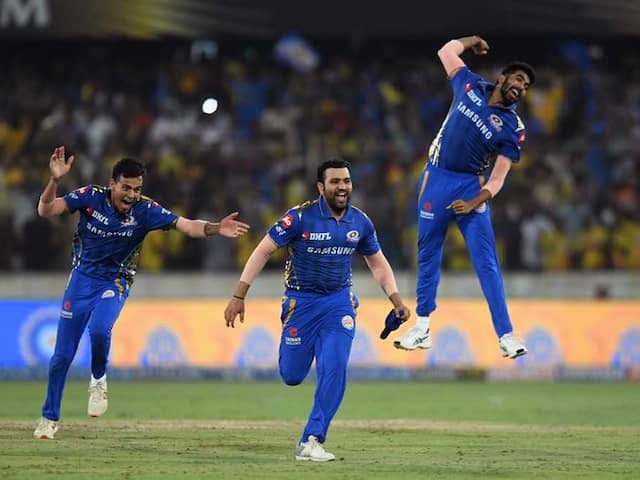 Mumbai Indians (MI) skipper Rohit Sharma called Sri Lanka veteran Lasith Malinga "champion bowler" after his side's record 4th Indian Premier League victory. Mumbai Indians became the most successful IPL franchise on Sunday when they defeated defending champions Chennai Super Kings (CSK) by one run in IPL 2019 final at Rajiv Gandhi International Cricket Stadium in Hyderabad. The hero for Mumbai Indians was 35-year-old Malinga who bowled the final over and didn't allow CSK batsmen to score nine runs. Prior to bowling the final over, Malinga had conceded 19 runs in the 18th over of CSK innings and after that not many would have given him a chance to save nine runs in the last over.

But the India vice-captain handed Malinga the ball and he didn't disappoint his skipper. Speaking at the post match presentation, MI skipper said, "Malinga is a champion, he has been doing it for many years for us."

Rohit said, "I was thinking of Hardik for the final over, but I wanted to back someone who has been in that situation for us before, and Malinga has been there many times."

Apart from Lasith Malinga, Rohit also credited his squad of 25 players and the entire support staff for their record title victory.

"Throughout the tournament we played some good cricket which was the reason we qualified at the top. We planned to split the tournament into two parts, every thing we did as a team, we got the rewards for them. We have a squad of 25 players, everyone came in at some stage and did the job; the support-staff as well," Rohit said.

Analysing his side's performance over the course of the tournament, he said, "Our bowling in particular was excellent, at different stages in the game, the bowlers put their hands up and brought us back. Every bowler who got an opportunity put their hand up, took responsibility and that's why we got the rewards for it."

Speaking about his leadership, he said, "I am learning in every game, every time I take the field. I have to credit the team as well, it is up to the boys to step up otherwise the captain is made to look foolish. Credit to the boys!," he signed off.

Rajiv Gandhi International Stadium, Hyderabad IPL 2019 Cricket
Get the latest Cricket news, check out the India cricket schedule, Cricket live score . Like us on Facebook or follow us on Twitter for more sports updates. You can also download the NDTV Cricket app for Android or iOS.