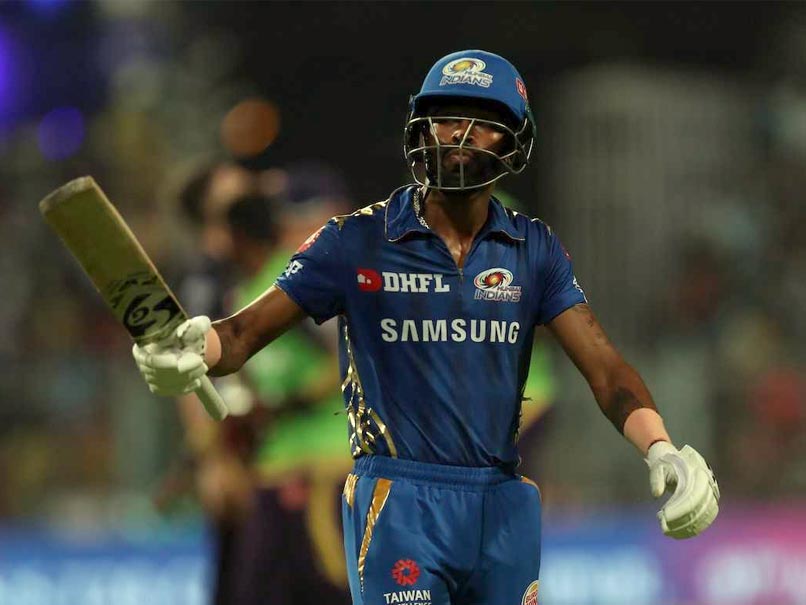 Mumbai Indians (MI) all-rounder Hardik Pandya scored 91 runs off 34 balls against Kolkata Knight Riders(KKR) on Sunday. Despite his whirlwind knock, MI faltered in the run-chase, losing the match at Eden Gardens by 34 runs. The in-form Hardik Pandya's knock gave Mumbai Indians an outside chance until he was dismissed by Harry Gurney. At the post-match presentation ceremony, Hardik said it was difficult for him (alone) to keep going after the KKR bowlers. He went through cramps but managed to score the boundaries at will (6 fours, 9 sixes). Despite the loss, Mumbai Indians (MI) still remain in the hunt for playoffs (7 wins, 5 losses).

"I am just holding my shape pretty well and the confidence makes a huge difference. I knew something different had to happen, but it was difficult for one guy to keep going. If Krunal had got a couple, we would have been proper in the game. My plan was to get close to the total so that the run rate doesn't get affected," he said.

It was the first time that the Mumbai Indians all-rounder had entered the 90s in the IPL and was close to reaching the three-figure mark.

"The situation demanded to go all out and I was lucky enough everything was coming out, except the ball I got out. To be honest, with this kind of total you don't think much, just go out there and express yourself. I knew (Keiron) Pollard was there, I couldn't take time and I just wanted to enjoy the game," Hardik added.

The 25-year-old said it would have been much closer had his brother Krunal stayed with him a little longer during the chase as then they could have taken the game deep.

"I was just telling Krunal 'damn I am close to a hundred' that is something new for me," added Hardik.

Eden Gardens Cricket
Get the latest updates on ICC T20 Worldcup 2022, check out the Schedule and Live Score. Like us on Facebook or follow us on Twitter for more sports updates. You can also download the NDTV Cricket app for Android or iOS.