Rohit Sharma lost his cool on Sunday during the KKR vs MI IPL 2019 clash at the Eden Gardens and was fined for his troubles. 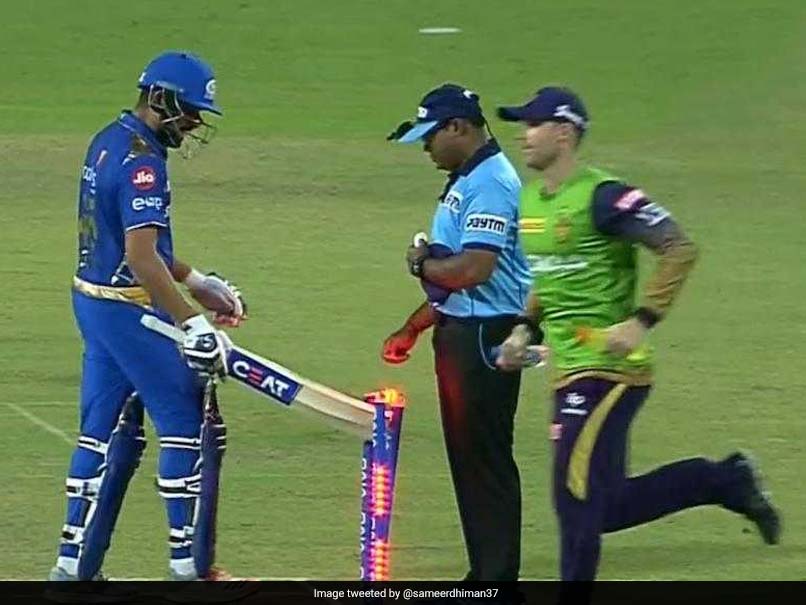 Rohit Sharma hit the stumps with his bat after being given out LBW.© Twitter

Rohit Sharma generally has a calm head on his shoulders and rarely shows dissent against an umpiring decision. However, the Mumbai Indians captain lost his cool on Sunday during the KKR vs MI IPL 2019 clash at the Eden Gardens and was fined for his troubles. Chasing a mammoth target of 233, Rohit Sharma was dismissed for 12 by Harry Gurney in the fourth over. Rohit Sharma was given out LBW by the umpire but reviewed the decision. Replays showed that the ball was snicking the leg stump with the DRS decision going in favour of 'Umpire's Call'.

If the umpire's decision had been not out, Rohit Sharma would have survived as the 'Umpire's Call' would have stood but that was not the case.

Unhappy with the decision, Rohit Sharma trudged off the field but not before hitting the stumps with his bat, right in front of the umpire standing at the non-striker's end.

Pretty poor display from @ImRo45 against #KKR umpire got that decision correct. The review is there to correct obvious errors, not to be wasted on a petulant captain averaging 27.

Rohit Sharma's behaviour is worse than Kohli's. They should suspend him. #MI #KKRvMI

Rohit Sharma fans should stop talking about Virat Kohli's on field behavior for at least a week now after what Rohit did today after getting out. #KKRvMI

Rohit sharma knocked down the bails infront of umpire..

@mipaltan @sachin_rt @ImRo45 @KieronPollard55 @YUVSTRONG12
Hitman should be punish for his ugly behaviour after his dismasal. It's a clean empire's call. @ImRo45 if u can, hit runs while u in the crease don't hit stumps after given out . @BCCI wt u gonna do for VC of India?

Rohit Sharma was fined 15 per cent of his match fees for his troubles. During the hearing with the match referee after the game, Rohit accepted the sanction.

"Rohit Sharma, the Mumbai Indians batsman and captain, was fined 15 percent of his match fees for breaching the VIVO Indian Premier League's (IPL) Code of Conduct during his team's match against Kolkata Knight Riders at Kolkata," an IPL media advisory read.

"Mr. Sharma admitted to the Level 1 offence 2.2 of the IPL's Code of Conduct and accepted the sanction."

Hardik Pandya's stunning knock of 91 off just 34 balls gave Mumbai Indians a glimmer of hope but other MI players failed to make a meaningful contribution.

In the end, Kolkata Knight Riders snapped their six-match losing streak with the 34-run win and kept their hopes alive of reaching the playoffs.

Rohit Sharma Harry Gurney IPL 2019 Kolkata Knight Riders vs Mumbai Indians, Match 47 Cricket
Get the latest updates on ICC T20 Worldcup 2022, check out the Schedule and Live Score. Like us on Facebook or follow us on Twitter for more sports updates. You can also download the NDTV Cricket app for Android or iOS.