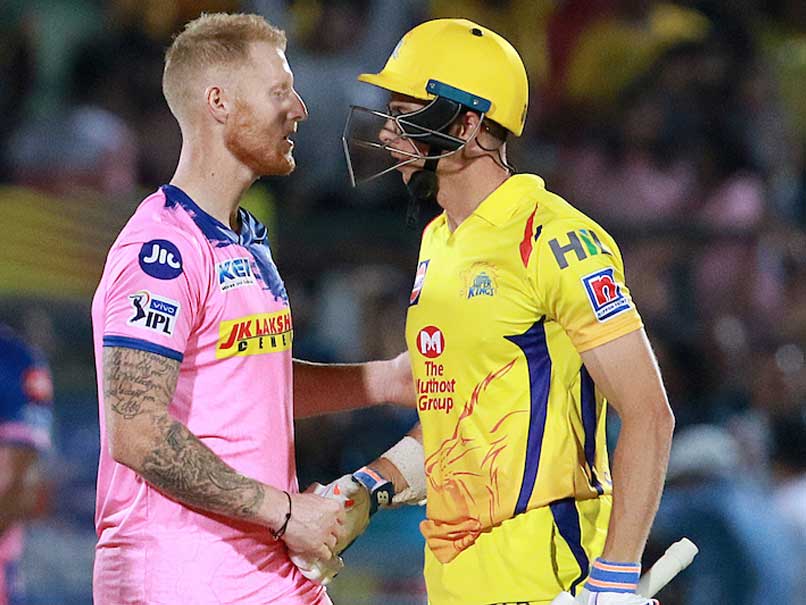 Mitchell Santner smacked Ben Stokes for a six off the last ball to help CSK register a thrilling win.© BCCI/IPL

Chennai Super Kings found the unlikeliest heroes in Mitchell Santner as the New Zealander smacked Ben Stokes for a six off the final ball to give Chennai Super Kings (CSK) a four-wicket win over Rajasthan Royals at the Sawai Mansingh Stadium in Jaipur on Thursday night. Santner came in as a replacement for Harbhajan Singh, who has been exceptional with the ball for CSK in IPL 2019. The New Zealand spinner took a wicket and gave away just 25 runs off his four overs to help restrict Rajasthan Royals to 151 for seven. The hosts, however, remained in contention with some brilliant fielding, none more spectacular that Ben Stokes' 'Superman' leap which will surely go down as one of the best catches in IPL history.

Standing at point, the Englishman came up with a moment of magic in the sixth over of the CSK innings. The fifth ball of Jofra Archer's over was slashed on the off side by Kedar Jadhav, but Stokes leapt to his left to pluck out the fast-travelling ball out of the air.

That would have been the highlight of the match and Stokes the hero but Mitchell Santner had other ideas.

After a solid spell with the ball, Santner made a more telling contribution with the bat in hand.

The New Zealand left-hander managed to club the first ball to long-on for a double despite it appearing to be a waist-high no-ball. Dhoni walked onto the field to protest against umpire's decision.

Despite all the drama around him, Santner kept a cool head and knocked the next delivery for another double.

Four were needed off the last ball now, but Stokes decided to hand CSK an early Diwali gift by bowling a wide, which left CSK needing 3 off the final ball.

Santner clinched the match for CSK by smashing Stokes for a maximum.

After his heroics, Matthew Hayden, sitting in the commentary box, referred to Santner as Superman's bespectacled alter ego.

"There is Superman. He is just gone back to being Clark Kent. Just his disguise. What a wonderful final ball for Santner," said Matthew Hayden in commentary box.