Hardik Pandya was suspended after some controversial comments during a talk show. 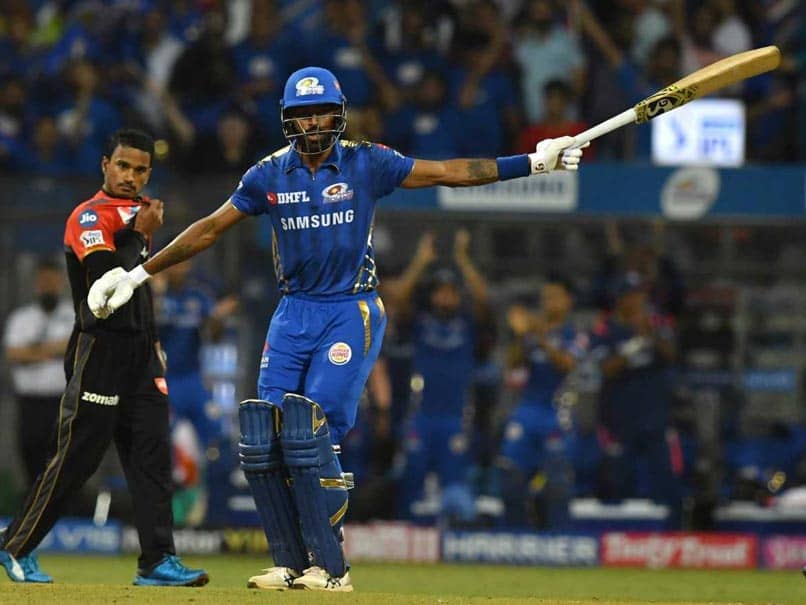 Hardik Pandya has admitted that his omission from cricket was an incentive to improve his game and his mentality, leading to a prolific IPL season that so far has accrued 186 runs with a strike rate of around 191, including his 37 runs off 16 balls on Monday that led Mumbai Indians (MI) to victory over Royal Challengers Bangalore (RCB). Hardik was put under provisional suspension by the Board of Control for Cricket in India (BCCI) for his controversial comments on a popular TV talk show. The suspension was subsequently lifted and Hardik Pandya and KL Rahul recently appeared before the BCCI Ombudsman. As of now, both are back on the playing arena.

"It's okay, everyone has a setback and for me, I got some time for my body (working on fitness routines) as well. The time I was out is helping me right now because I am in a good mind-set and everything is coming right," Pandya said after the win over RCB.

Hardik was happy to be striking the ball after his return to cricket through the IPL. The flamboyant all-rounder has been MI's designated finisher, a role that he relishes.

"I have been doing that for the last four years now. That's my role in any team I play for. I have been practising at the nets the same thing. It is about the situation. You play according to situation and if you are smart enough, you will more often get the result you desire," he added.

Pandya is expected to play an instrumental role in this year's World Cup 2019 campaign and IPL seems to be providing him a solid foundation.

"It is pretty important to always have the confidence behind you. The World Cup is a big stage. It is for the first time that I will be playing (a World Cup). It is important for me to keep hitting the ball well. I was away from the game for some time, so coming back it was important for me to hit well," he said

About the World Cup in the UK, Pandya said if the conditions were similar to those during the 2017 ICC Champions Trophy, India will have an advantage.

"We have to see the conditions because the last time we went, a lot of people told me that it will be swinging, it will be nice and cold but eventually, I have never played on such a flat wickets before.

"It will depend on the situation and the conditions. If it's the same conditions that we encountered in the Champions Trophy, it will be a help for us".

Pandya insisted that he will always focus on the basics, regardless of the event.

"Cricket will always be the same. Be it the World Cup or IPL, the pressure will be same. I will follow my basics. That's what has got success for me and I will keep backing myself that way."

Mumbai Indians
Get the latest updates on India vs England Series, India vs England , live score and IPL 2021 Auction . Like us on Facebook or follow us on Twitter for more sports updates. You can also download the NDTV Cricket app for Android or iOS.