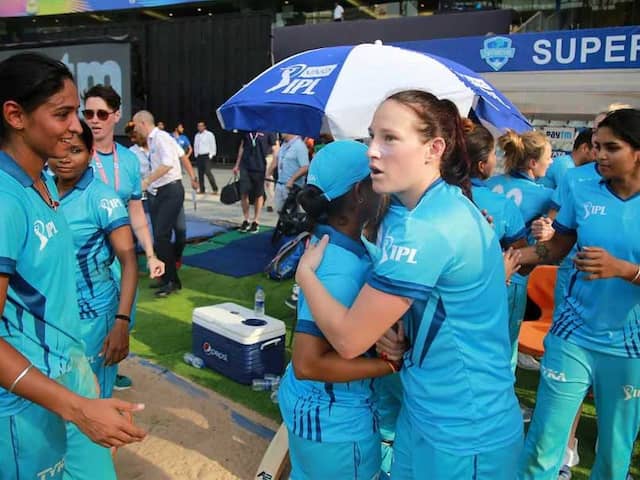 Supernovas celebrate after winning the match against Trailblazers© BCCI

Harmanpreet Kaur-led IPL Supernovas dug deep in to register a last-ball victory over Smriti Mandhana-led IPL Trailblazers during the IPL Women's T20 match at the Wankhede Stadium on Tuesday. Chasing a target of 130, Mithali Raj (22) and Danielle Wyatt (24) gave Supernovas a brilliant start thus building a solid foundation for the run-chase. Trailblazers never looked like being in the competition as Supernovas were cruising in the run-chase with occasional boundaries. However, they were dealt with a blow when they lost both openers in quick succession. Post that, the middle-order batting line-up rose to the occasion as Harmanpreet (21) along with Meg Lanning (16) and Sophie Devine (19) took Supernovas forward in the run chase.

Suzie Bates was given the responsibility to bowl the last over with the opposition needing four 4 runs. Suzie (2/16) bowled brilliantly to restrict the Supernovas but Pooja Vastrakar played the role of the match finisher as she hit the winning run.

Earlier, Trailblazers rode on Suzie Bates (32) and Jemimah Rodrigues' (25) gritty innings to post a meagre 129/6 in 20 overs. Winning the toss, Harmanpreet elected to field. Smriti (14) and Alyssa Healy (7) could not give a solid start to their team as Supernovas ran through the top-order batting line-up.

Trailblazers lost their first three wickets early before Suzie (34) and Jemimah (29) played brilliantly to steady the Trailblazers' ship. For Supernovas, Megan Schutt and Ellyse Perry took two wickets each, while Rajeshwari Gayakwad and Anuja Patil picked up a wicket each.

The match, however, was marred with a no-ball controversy that occurred in the third over. A big no-ball was not called as the same that led to Beth Mooney's dismissal. Megan Schutt, the bowler, too, was in disbelief after the giant screen on the ground read as 'out.'

Suzie Bates was adjudged as the Player of the match.

Comments
Topics mentioned in this article
Mithali Raj Harmanpreet Kaur Indian Premier League 2018 Cricket
Get the latest Cricket news, check out the India cricket schedule, Cricket live score . Like us on Facebook or follow us on Twitter for more sports updates. You can also download the NDTV Cricket app for Android or iOS.