Smriti Mandhana and Harmanpreet Kaurs teams will face off in a novel womens t20 challenge match ahead of the IPL 2018 Playoffs Qualifier 1. 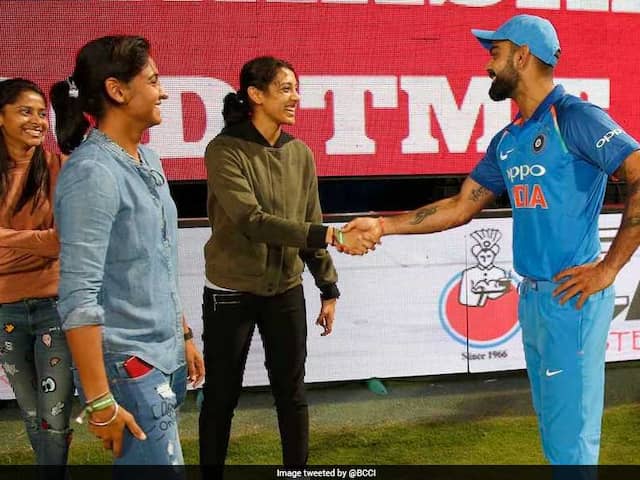 The stage is set for the historical Indian Premier League (IPL) women's challenge match between IPL Trailblazers led by Smriti Mandhana and Harmanpreet Kaur-captained IPL Supernovas at the Wankhede Stadium on Tuesday. Ahead of the exhibition match, which is also deemed as a stepping stone for the launch of an Indian women's T20 league in the country, India skipper Virat Kohli asked everyone to cheer for the two teams. The official IPL Twitter account posted a short 31-second video. A message from #TeamIndia Skipper @imVkohli for @mandhana_smriti & @ImHarmanpreet as they gear up for the Women's T20 Challenge tomorrow. #IPLWomen #Supernovas #Trailblazers".

Calling the match a teaser for the future of the T20 league, Kohli said, "Hello everyone. I am really excited to understand there's been a T20 league for women announced. And there's going to be a game on 22nd May at the Wankhede Stadium in Mumbai. It's more like a teaser or trailer for that particular league."

A message from #TeamIndia Skipper @imVkohli for @mandhana_smriti & @ImHarmanpreet as they gear up for the Women's T20 Challenge tomorrow. #IPLWomen #Supernovas #Trailblazers pic.twitter.com/IxKVHCGmvY

Wishing luck to the two captains, Mandhana and Harmanpreet, Kohli said, "Smriti and Harmanpreet are going to lead their respective teams so I wish you all the best. Take out your teams on the park and play with the passion that you have shown for the nation. Show people what they should look forward to when they come and watch the women's T20 league as well. I wish you guys all the best and we will all be watching keenly. Good luck."

Several international women stars from India, Australia, England and New Zealand will be seen in action. Among those to be seen will be Mithali Raj, Jhulan Goswami, Danielle Wyatt, Alyssa Healy and Suzie Bates.

This match will be played ahead of the first IPL Playoffs Qualifier between SunRisers Hyderabad (SRH) and Chennai Super Kings (CSK).

Comments
Topics mentioned in this article
India Women India Cricket Team Smriti Mandhana Harmanpreet Kaur Virat Kohli Indian Premier League 2018 Cricket
Get the latest updates on IPL 2020, check out the IPL Schedule for 2020 and Indian Premier League (IPL) Cricket live score . Like us on Facebook or follow us on Twitter for more sports updates. You can also download the NDTV Cricket app for Android or iOS.