SunRisers Hyderabad and Chennai Super Kings would both be keen to seal of final spot. 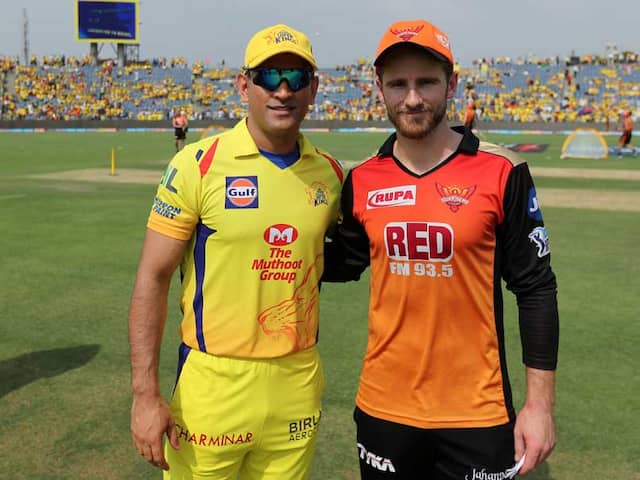 With the race for the IPL 2018 Playoffs having been decided on the very last day of the league engagements, SunRisers Hyderabad (SRH) and Chennai Super Kings (CSK) would both be keen to seal off a berth in the Season11 final when they meet in IPL Qualifier 1 at Mumbai's Wankhede Stadium on Tuesday. SunRisers Hyderabad ended on top of the IPL 2018 Points Table even though they lost their last league engagements, while Chennai Super Kings finished second, by run-rate after they won their last league match. Kane Williamson and MS Dhoni will be leading two of the most efficient teams in SRH and CSK and the match promises to be quite a contest.

While the winner sails straight into the final slated for May 27, also at Mumbai, the loser will be playing Qualifier 2 in Kolkata on May 25.

A slight net run-rate difference separated the two teams which finished the league stage on 18 points.

While Chennai stopped the aspirations of Kings XI Punjab by overcoming a difficult start last night in their adopted home base of Pune, SRH have been on a three-game losing run, having sealed their play-off spot with a victory on May 10 against Delhi Daredevils.

They had somehow not been able to muster up the intensity shown in the better of their league stage campaign and to some extent their highly-rated bowling attack also looked off-coloured in the previous three games.

It was the Chennai Super Kings who halted Sunrisers Hyderabad's six-game winning streak with a comprehensive eight-wicket drubbing on May 13 in Pune.

SRH have depended totally on their captain Kane Williamson, who has been in terrific form to rise to the number two slot in the leading run-getters' list with 661 runs at just over 60 per game.

Only he and Shikhar Dhawan (437 runs), who took some time to get going, have shown consistency with the bat in contrast to their bowling attack which, barring the last few games, has been the talking point of the season.

In bowling they have depended mostly on seamers Bhuvneshwar Kumar, Sidharth Kaul and Sandeep Sharma as well as on overseas spinners Rashid Khan and Shakib Al Hasan.

The plus point for CSK, who have alternately blown hot and cold in their last six games, is that they have not depended on just a couple of batsmen although Ambati Rayudu has been their standout performer with 586 runs.

Shane Watson (438 runs from 13 matches) too has been in top form along with skipper Mahendra Singh Dhoni. The form of key batsman Suresh Raina, who anchored the innings splendidly against Kings XI Punjab yesterday with an unbeaten 61, is another encouraging sign.

The outstanding spell of fast bowling by young South African Lungi Ngidi, who grabbed 4 for 10 to take the man of the match award last night, could not have come at a more opportune time for the Super Kings.

With Shardul Thakur, Deepak Chahar and Dwayne Bravo doing their bit on the pace bowling front, Super Kings will be banking on spin twins Harbhajan Singh and Ravindra Jadeja to deliver in the middle overs.

A women's exhibition game will take place at 2 pm before the evening clash with top Indian and foreign players taking part in the game.