Kidambi Srikanth is an ardent MS Dhoni fan and he has expressed his happiness over receiving the special gift. 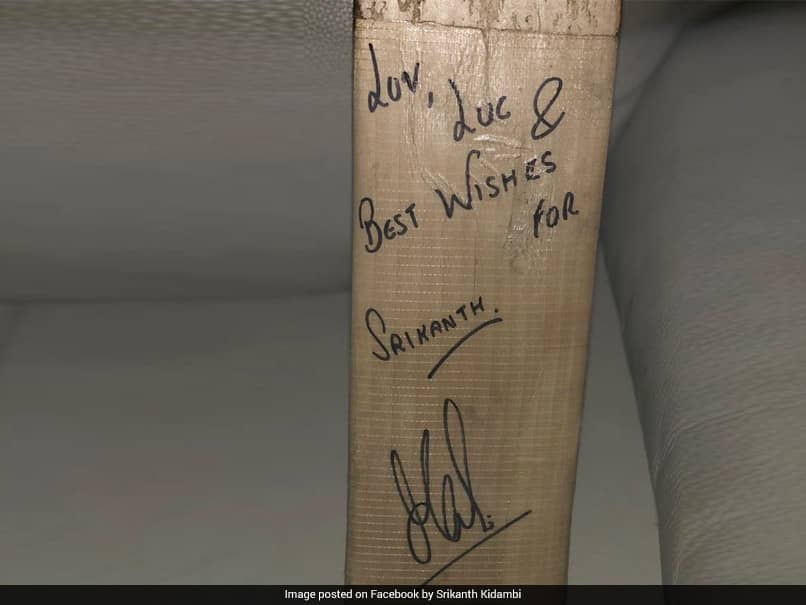 Former India captain and current Chennai Super Kings (CSK) skipper MS Dhoni has an ardent fan following. There are a zillion fans who adore the man who led India to the 2011 World Cup triumph. Among the many Dhoni supporters, badminton star and world number 3 Kidambi Srikanth is also a Dhoni fan. Srikanth was in for a pleasant surprise when he received a bat signed by Dhoni on Sunday. "Thank you MSD for the wonderful gift and can't tell how happy I am. This just made my day. #MSDhoni #fanmoment", he captioned his post on Facebook.

Srikanth had won the silver medal in the recently concluded 2018 Commonwealth Games in Gold Coast.

Earlier this month, Srikanth had climbed to the third spot in the latest rankings released by the Badminton World Federation (BWF). Srikanth climbed a couple of spots from fifth place. Fellow Indian HS Prannoy also rose two rungs to take the eighth spot.

Viktor Axelsen of Denmark is at the top spot followed by South Korean Son Wan Ho. Srikanth is currently on 74,135 points while Son has 74,670. Axelsen has a sizeable lead at the top with 77,570 points.

Meanwhile, Dhoni has been leading his team Chennai Super Kings from the front as they have qualified for the IPL 2018 playoffs. Dhoni has also been prolific with that bat amassing 430 runs in 13 matches at an astonishing batting average of 86.00. Chennai take on Kings XI Punjab (KXIP) on Sunday in the final match of the round robin stage of the IPL.

Comments
Topics mentioned in this article
Kidambi Srikanth Chennai Super Kings MS Dhoni Indian Premier League 2018 Badminton Cricket
Get the latest updates on IPL 2020, check out the IPL Schedule for 2020 and Indian Premier League (IPL) Cricket live score . Like us on Facebook or follow us on Twitter for more sports updates. You can also download the NDTV Cricket app for Android or iOS.