IPL Highlights, MI Vs RPS: Rising Pune Supergiant's win over Mumbai Indians gave them a third victory on the trot while Mumbai suffered their first defeat after six consecutive wins 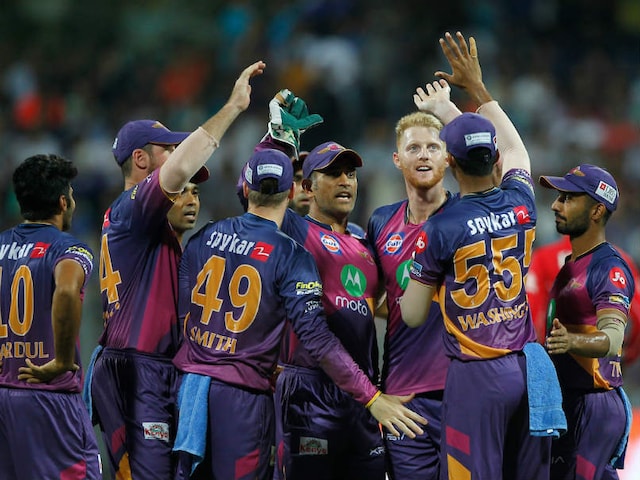 Mumbai Indians (MI) came close but failed to go the distance and win their seventh IPL match on the trot as they lost to Rising Pune Supergiant by 3 runs at the Wankhede Stadium on Monday night. It seems the Pune team is Mumbai's weak spot as they had lost to them in the first match too! While Mumbai restricted Pune to 160/6 to set up an achievable target, they lost wickets in quick succession before captain Rohit Sharma's 30th IPL half century, the first of the season, saw them close the gap considerably. Ben Stokes' (2/21) economical bowling was key in turning the game around to ruin Sachin Tendulkar's birthday party. (SCORECARD)

Catch the highlights and updates of MI Vs RPS match in Mumbai, here:

23:49 IST: Thanks for joining us for the live blog this evening. Do join us for Tuesday's game against Royal Challengers Bangalore and Sunrisers Hyderabad at Bengaluru. Good night!

23:30 IST: OUT!!! Rohit caught and bowled by Unadkat! A big wicket but it seems Unadkat has hurt his head taking the catch!! Mumbai need 11 in 2 balls

23:29 IST: SIX!!! Rohit Sharma is leading the way!! He muscles the ball over long on for a crucial maximum. Will this be the game changer? Mumbai need 11 of 4

23:26 IST: It's a tense situation at the Wankhede. Let's see what happens in the last over!

23:22 IST: A wide from Stokes! That's criminal, especially in such an important stage of the match

23:18 IST: FOUR! Pandya powers through the off side for his maiden boundary!

FIFTY! @ImRo45 brings up his 22nd #MI half-century. A gem of an innings from our skipper.#CricketMeriJaan #MIvRPS pic.twitter.com/1ZCK8rv2Ii

23:13 IST: Phew, not out! An appeal for stumping but Hardik Pandya is saved for now

23:05 IST: SIX!!! The Mumbai captain is taking MI towards victory single-handed it seems!

22:56 IST: Followed by a SIX!! Imran Tahir seems helpless as Rohit takes him to the cleaners

22:47 IST: SIX! Karn hits a maximum after Tiwary drops him on the previous ball. What a punishment!

22:44 IST: FOUR!! Stylish boundary by Rohit after he scoops it away to fine leg

22:23 IST: Something for Sachin fans from the Wankhede:

22:09 IST: FOUR! It seems Parthiv and Buttler keeping the number of boundaries in tandem. Third boundary for Buttler, Parthiv made the same number in the last over.

22:04 IST: FOUR and FOUR! What stylish boundaries by Pathiv, three in a row!! An expensive over from Sundar!

22:00 IST: FOUR and FOUR!! Buttler smashes Shardul Thakur for two back to back boundaries

21:53 IST: Parthiv Patel and Jos Buttler open for Mumbai again. They have opened in all the games for Mumbai so far. Washington Sundar takes the new ball for Pune.

21:41 IST: Stay tuned for Mumbai's innings. They are aiming for their seventh straight win

21:35 IST: And FOUR again!! Tiwary is going all out to deliver for Pune

21:34 IST: Four! Great start to the over by Tiwary who got into position early to smash the bowl off Bumrah

21:23 IST: OUT! Bumrah takes the prized wicket of MS Dhoni who departs for 7

21:09 IST: Pune are 120/3 at the end of 15 overs. Pune are doing it in singles and doubles right now. The boundaries seem to have dried up suddenly.

20:56 IST: MS Dhoni has plenty of fans at Wankhede it seems! He is playing his 150th IPL match today!

20:53 IST: Oh my god what a drop! Bhajji drops Smith! And Smith punishes Mumbai with a FOUR on the very next ball!

20:51 IST: OUT!! Tripathi falls short of his second IPL half century as he departs at 45. Karn takes second wicket on his Mumbai debut.

20:44 IST: SIX!! What a sweep by Tripathi as captain Smith joins him

20:42 IST: OUT! Rahane looking to cut the ball but it was too close to the body. It pops up in the air and a simple return catch by Karn. (Rahane dismissed for 38 runs)

20:40 IST: Best opening partnership for Pune this season by Rahane and Tripathi.

20:35 IST: Four and Four!! Tripathi is giving Rahane company... This is the second time this season that Pune have not lost a wicket in the first six overs!

20:30 IST: Sachin thought he would cut the cake quietly but didn't expect the whole stadium singing for him he says! He's been flooded with good wishes on Twitter! Virat Kohli's tweet is just an example:

Happy B'day Paaji . May God bless you with more happiness and peace in life. My cricket hero always. @sachin_rt pic.twitter.com/HGgrdFGv3x

20:29 IST: Bhajji given the ball as the crowd sings Happy Birthday to Sachin! The legend is celebrating his 44th birthday.

20:26 IST: FOUR! Rahane is all about timing. Beautifully timed boundary wide off mid on

20:24 IST: Six! What a shot by Tripathi! Hits a maximum off Karn Sharma over long-on boundary

20:20 IST: Four! Rahane has been excellent since the start. Beautifully timed boundary...

20:16 IST: Karn Sharma given the ball... Very economical over

20:09 IST: Run out appeal against Rahane but hey, replays confirm he's not out!

20:03 IST: First extra for the evening, Johnson bowls a wide

19:58 IST: Get ready folks, the start is about to start. Pune will be hoping for a good start.

19:51 IST: Did you know MS Dhoni will be playing in his 150th IPL match today? He's played 129 matches for former team Chennai Super Kings and 21 for Pune!

19:32 IST: Krunal Pandya will be missing from the Mumbai line-up with an injury. Karn Sharma will be replacing him. There's no change in the Pune line-up.

19:23 IST: We are minutes away from the toss... Mumbai Indians will be keen to gift mentor Sachin Tendulkar a win on his birthday and extend their win-streak. Pune, on the other hand, will be hoping to beat the home team once again! Pune have gained some momentum with their back-to-back victories after three defeats.

19:18 IST: Hello and welcome to the live blog of the Mumbai Indians vs Rising Pune Supergiant IPL match!

RPS, on the other hand, were looking like they would go down to another loss before Dhoni crafted one of his classic chases. The former India captain hammered 61 not out off just 34 balls as the Pune team rose from 121/4 at the beginning of the 17th over to carve out 58 runs in 3.5 overs. That win should work wonders for RPS and even MI, eying a revenge win, would be a little wary of MS Dhoni.