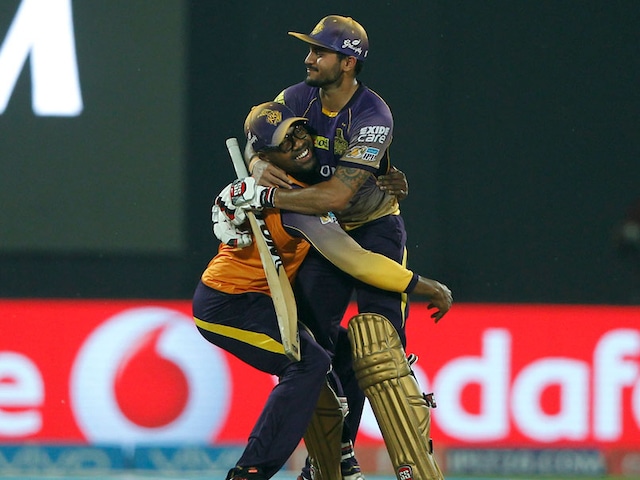 Half centuries by Yusuf Pathan and Manish Pandey enabled Kolkata Knight Riders overcome early jitters en route a thrilling four-wicket win over Delhi Daredevils in an Indian Premier League match on Monday. It was a team effort by KKR, who first rode on Sunil Narine and Nathan Coulter-Nile controlled bowling effort to restrict Delhi to 168 for seven, and then Pathan (59) and Pandey (69 not out) anchored the chase to perfection as they won with a ball to spare.It went down to the wire in the end with KKR needing nine runs from the last over. The first two balls from Amit Mishra resulted in dots as well as a wicket.

With the third ball yielding a run, Pandey got to the strike and straight away hit a much-needed six to KKR's relief. He eventually sealed it off in style with one ball remaining.

Chasing a modest 169 for victory , Kolkata lost three quick wickets to be reeling at 21 for three before Pathan and Pandey joined hands to put on a crucial 110-run stand off just 72 balls for the fourth wicket.

But after Pathan's dismissal, Daredevils had their chances but KKR managed to have the last laugh.

Despite Kolkata struggling at one stage, Pathan dealt in fours and sixes to not just show his batting prowess but keep the team in the hunt.

He, in the able company of Pandey, ensured that the Knight Riders were always in the game.

Pathan brought up his half-century in style as he hit Delhi skipper Zaheer Khan for a six.

The duo slowly and steadily stole the match away from the home team but Pathan failed to finish it for KKR as he fell for a well-made 59 off 39 balls, which included six boundaries and two sixes.

Zaheer, on his part, showed that the class is permanent as he finished with figures of two for 28 from his four overs, while Pat Cummins took two for 39.

Even after Pathan's departure, Pandey continued and remained unbeaten off 49 balls studded with four fours and three sixes.

Earlier, Delhi reached a decent total riding on a late cameo by Rishabh Pant even as Coulter-Nile and Narine managed to restrict the hosts with their superb bowling.

Off to a blazing start after opting to bat, Sanju Samson and Sam Billings laid a solid platform for Delhi with a quick 53-run opening stand but after the two got dismissed, KKR bowlers led by Coulter-Nile dominated the middle overs to put a leash on the increasing run-rate.

It was the 17th over bowled by Umesh Yadav, which yielded 26 runs. Pant launched into a furious assault hitting him for three sixes and two fours in that over.

Coulter-Nile was the pick of the Kolkata bowlers, finishing with impressive figures of three for 22, while Narine chipped in with economical one for 20.

To begin with, Samson took the Kolkata bowlers by the scruff of their necks, and was dealing in boundaries since the very first over.

The only centurion of the season so far, Samson made his intentions clear from the very beginning, hitting Coulter-Nile for two back-to-back boundaries, which saw the Daredevils getting off the blocks in the opening over of the match.

Samson was severe on Umesh as he struck him for three boundaries to set the tone for the Daredevils to reach a competitive total.

Umesh was the most expensive of the KKR bowlers with figures of 4-0-53-1.

Even the introduction of Kuldeep Yadav and Narine failed to stop Delhi as they cruised to 53 for no loss in the Powerplay overs.

It was between overs between 10 to 16 that Delhi managed only 36 runs despite a good start before Pant carried out a redemption act during the end overs.

Comments
Topics mentioned in this article
Kolkata Knight Riders Delhi Daredevils Manish Pandey Yusuf Pathan Feroz Shah Kotla, Delhi IPL 2017 Cricket
Get the latest Cricket news, check out the India cricket schedule, Cricket live score . Like us on Facebook or follow us on Twitter for more sports updates. You can also download the NDTV Cricket app for Android or iOS.