India vs West Indies: The third ODI in Cuttack will be a series decider, with West Indies winning the first match and India coming back strong in the second. 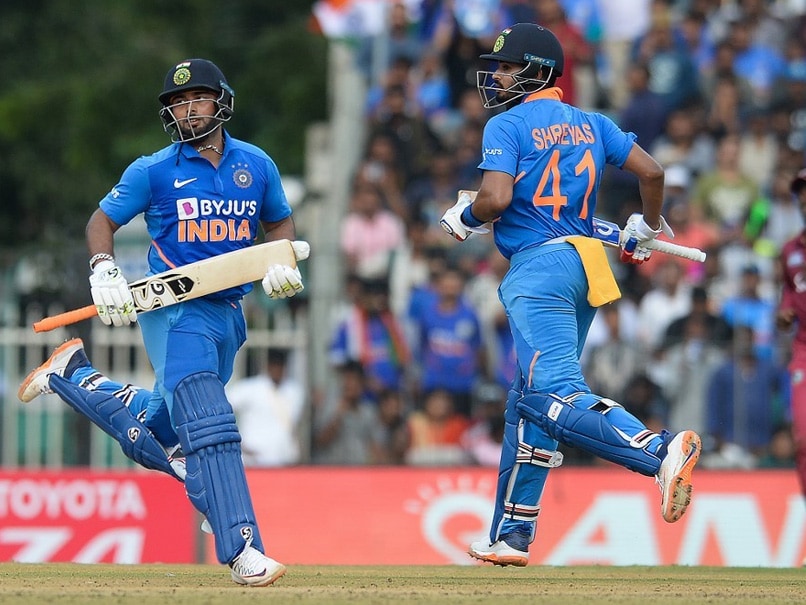 Shreyas Iyer and Rishabh Pant have been in fine form this series.© AFP

India and the West Indies will clash in the crucial third ODI in Cuttack on Sunday. After the West Indies comfortably won the first match, India came back strong in Vizag with a 107-run win over the visitors. The home side will be hoping for a strong performance again from the top order and will also be buoyed by the good form shown by the middle-order batsmen, which has for a long time given selection headaches to the team management. The West Indies, on their part, will again look to Shai Hope to anchor their batting while hoping for a better showing from the bowlers, who could do little to stop India from posting a massive total in the second ODI.

India were presented with a setback in the form of an injury to seamer Deepak Chahar. The fast bowler was ruled out of the series-decider with a lower back injury and replaced in the squad by left-arm pacer Navdeep Saini.

India were already without Bhuvneshwar Kumar for the series, with Shardul Thakur named as his replacement. Thakur played ahead of all-rounder Shivam Dube in the second match and took the first wicket in the West Indies' innings. And with Chahar also out of the match, skipper Virat Kohli will have yet another selection dilemma on his hands.

Indian openers Rohit Sharma and KL Rahul, who both hit centuries in Vizag, will be looking to carry on their good form. But the real positive with the bat for India in the series have been Shreyas Iyer, who has two half-centuries in the series, and Rishabh Pant.

Under constant scrutiny, Pant played a crucial knock under pressure in the first ODI to help India out of a tricky situation and post a competitive total. He followed that up with a 15-ball 39 in Vizag and will be hoping to finish the series on a high.

Kuldeep Yadav is sure to keep his spot in the team as well, as he ended a spell of poor games with a brilliant hat-trick, his second in the 50-over format, that ended the West Indies' chase in the second ODI.

The West indies will rely on opener Shai Hope to provide stability with the bat and hope that the power-hitters around him like Shimron Hetmyer and Nicholas Pooran provide enough firepower. Hope has been in fine form in the series, following up his gritty ton in the first match with a fighting half-century in the second.

If India win the match, they will complete their tenth consecutive bilateral ODI series win against the West Indies.

West Indies Cricket Team Cricket
Get the latest updates on IND vs NZ 2021, check out the Schedule and Live Score . Like us on Facebook or follow us on Twitter for more sports updates. You can also download the NDTV Cricket app for Android or iOS.