Shreyas Iyer began celebrating his half-century while still one run short, during the 2nd ODI with the West Indies, and Virat Kohli couldn't stop laughing. 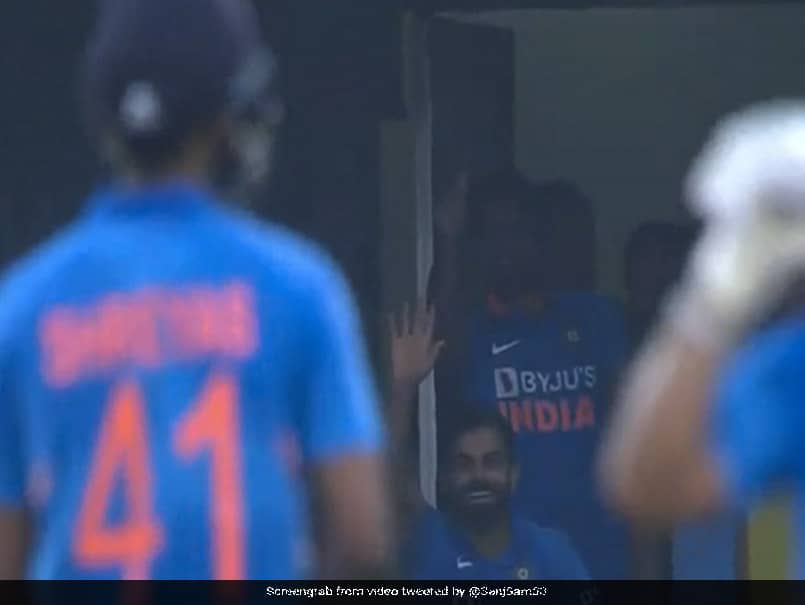 Virat Kohli lost his wicket for a golden duck but didn't fail to entertain his fans with a hilarious reaction on Shreyas Iyer's premature celebration for a half-century during the second One-day International in Vizag on Wednesday. On the second ball of the 48th over, Shreyas Iyer smashed Keemo Paul for a single run and raised his bat to celebrate a fifty with one run left but was corrected immediately by captain Virat Kohli and his other teammates from the pavilion. Among all, Virat Kohli stood out giggling over the whole incident while signalling Shreyas Iyer to stop the early celebration.

The video went viral on social media within no time.

India rode on centuries by Rohit Sharma and KL Rahul to post a huge total of 387/5 after being asked to bat.

Rohit top-scored for India with 159 runs off 138 balls, including 17 fours and five sixes. He stitched a 227-run opening partnership with Rahul, who starred with a 102-run knock decorated by eight boundaries and three sixes.

Spinner Kuldeep Yadav then claimed a hat-trick as India wrapped up the West Indies for 280 despite impressive knocks from Shai Hope (78) and Nicholas Pooran (75).

India had lost the series opener by eight wickets in Chennai and thus, they levelled the three-match ODI series with a 107-run victory in Visakhapatnam.

The third and final ODI will be played in Cuttack on Sunday.

Virat Kohli Cricket India vs West Indies, 2nd ODI India vs West Indies 2019/20
Get the latest updates on IPL 2021, IPL Points Table , IPL Schedule 2021 , live score . Like us on Facebook or follow us on Twitter for more sports updates. You can also download the NDTV Cricket app for Android or iOS.