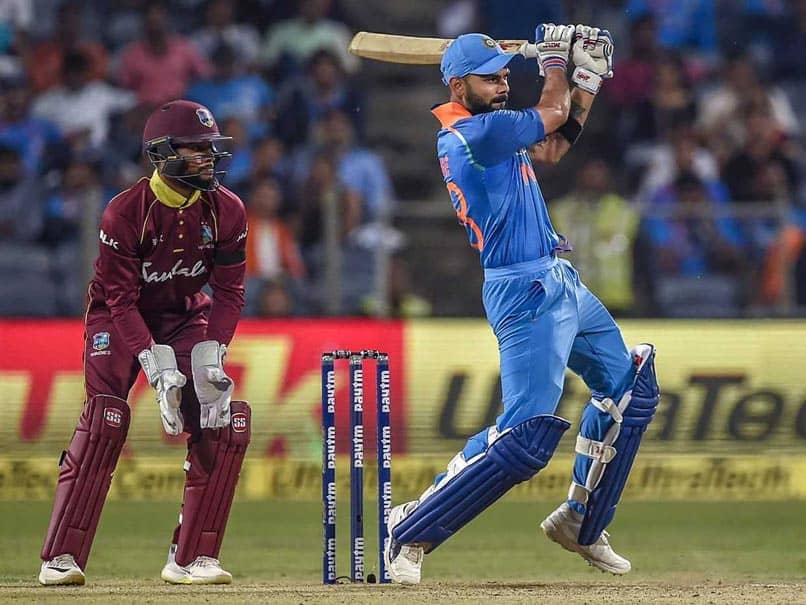 Virat Kohli scored 107 off 119 balls in the second ODI against the Windies in Pune.© PTI

India captain Virat Kohli on Saturday became the first Indian player to score three consecutive centuries in One-day Internationals (ODIs). Virat Kohli achieved this feat during the third ODI against the Windies at the Maharashtra Cricket Association Stadium in Pune. The right-handed batsman reached the coveted three-figure mark off 110 balls in 37.1 overs at a strike rate of 90.91. This was Kohli's fifth hundred in his last six ODIs in India. Cricketers took to Twitter to congratulate Kohli on achieving this feat. While cricket legend Sachin Tendulkar dubbed Kohli as "special", Harbhajan Singh was all praises for the 29-year-old.

A hat-trick of hundreds is just an incredible feat by a special player. Well done @imVkohli. pic.twitter.com/DMc95fCPPX

Other than Virat Kohli, only three other batsmen have scored three consecutive hundreds in a bilateral series - Pakistan's Zaheer Abbas (against India), Quinton de Kock of South Africa (against India) and Babar Azam of Pakistan (against the West Indies).

On the match front, Windies displayed a spirited performance to beat the hosts by 43 runs, drawing the five-match ODI series 1-1. Kohli fought a lone battle as he kept losing partners.

Eventually, Kohli departed for 107 off 119 balls, allowing the Windies to edge closer to a victory.

Ashley Nurse, adjudged man of the match, ended with figures of 2/43.

The fourth ODI will be played at the Brabourne Stadium in Mumbai on October 29.

Sachin Tendulkar Harbhajan Singh India vs West Indies 2018 Cricket India vs West Indies, 3rd ODI
Get the latest updates on IPL 2021, IPL Points Table , IPL Schedule 2021 , live score . Like us on Facebook or follow us on Twitter for more sports updates. You can also download the NDTV Cricket app for Android or iOS.