Manish Pandey and Dinesh Karthik ran the single after Allen misfielded the former's shot to pick up the winning run. 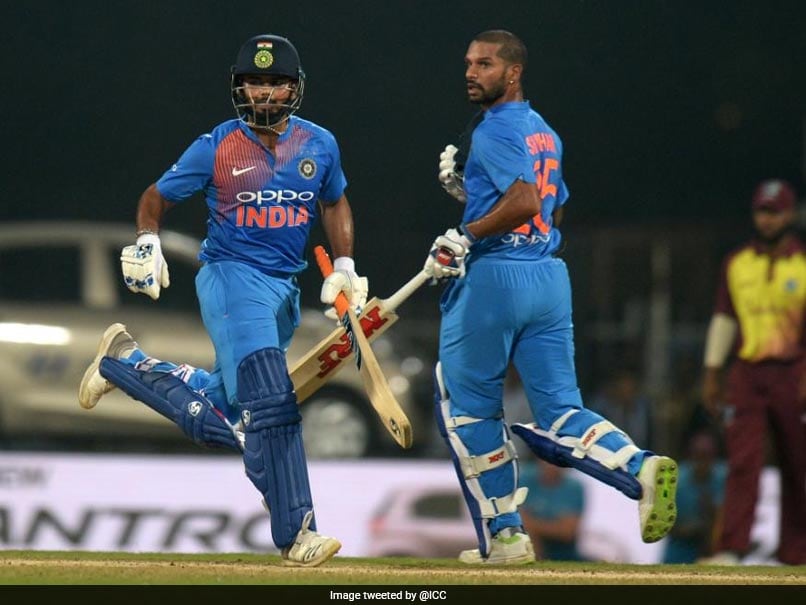 Shikhar Dhawan smashed a career-best 92 to guide India to a thrilling six-wicket win over the West Indies in the third and final T20 International, thus completing a 3-0 clean sweep in Chennai on Sunday. Dhawan hit 10 fours and two sixes in his 62-ball innings and forged a scintillating 130-run partnership with Rishab Pant (58) for the third wicket to take India home in the last ball of the innings. There was some drama towards the end as India lost the wickets of Pant and Dhawan leaving the host to score one run off the last delivery bowled by Fabian Allen to secure the victory. Manish Pandey and Dinesh Karthik ran the single after Allen misfielded the former's shot to pick up the winning run.

The Delhi duo put up a splendid show, treating the spectators at the M A Chidambaram stadium to some spectacular shots with Pant, in particular, showing a penchant to go for the big shots.

After an indifferent run in the first two matches, Dhawan found his groove early and stroked the ball fluently.

Boundaries flowed from his bat as he kept the scoreboard ticking. The two were quick between the wickets and also ran twos at will.

The Indian innings started on a disappointing note for Rohit Sharma's fans as the skipper fell after scoring a boundary, caught by his opposite number Carlos Brathwaite off Kemo Paul's bowling. He started the innings 69 runs short of overhauling New Zealand's Martin Guptill as the highest run-maker in T20 Internationals but the in-form Mumbai batsman exited in the third over.

The stylish K L Rahul, who came in at the fall of his skipper's wicket, hit four boundaries in his brief stay, before nicking one from the pacer Oshane Thomas to the wicket-keeper Denesh Ramdin.

Dhawan and Pant then joined hands and dominated the West Indies attack which seemed clueless as to how to stop the flow of runs. Both went on the rampage and none of the bowlers could provide a breakthrough.

Pant, who reached his 50 in 30 balls became the second youngest Indian to score a T20I fifty at 21 years and 38 days.

Skipper Rohit Sharma at 20 years and 143 days holds the record. The dashing Pant hit some audacious shots and hoisted three sixes in his attacking half-century before being bowled by Paul in the 19th over.

Dhawan seemed to have regained his touch ahead of the tour of Australia as he flayed the bowlers all round the park and fell when one run was required for a win.

He clubbed a ball from spinner Allen straight down the throat of Kieron Pollard at long-on.

Paul was the most successful West Indies bowler with 2 for 32 while Thomas and Allen took a wicket each.

Earlier, Pooran blasted four boundaries and as many sixes in his 25-ball unbeaten innings. His blistering 87-run unbeaten partnership in 43 balls with fellow southpaw Darren Bravo (43 off 37 balls) enabled the team move from 94 for 3 to 181 in the allotted 20 overs.

Reeling after two crushing defeats, the West Indies showed the stomach to fight as they batted with a lot more purpose here.

Pooran, who has been on the fringes for a while and did well in the Caribbean Premier League (CPL), showed why he is rated highly, batting with a lot of enterprise. He wasn't afraid to go for his shots and also employed the switch-hit on a few occasions, including hammering a six off Chahal.

Bravo offered him great support and hit a couple of big sixers of his own. Chahal, who got a lot of turn off the wicket, was the most successful Indian bowler with 2 for 28 from his four overs, but faced the heat towards the end when Pooran and Bravo went on the attack. Washington Sundar, who took the wicket of Denesh Ramdin (15), was the other wicket-taker.

Young pacer Khaleel Ahmed had a good start to his spell but he couldn't make much of an impression. Experienced Bhuvneshwar Kumar too remained without wickets.

Earlier, openers Shimron Hetmyer (26) and Shai Hope (24) got the visitors off to a brisk start and looked to score from the word go after captain Carlos Brathwaite won the toss and elected to bat.

Hetmyer, one of the success stories of the series for the Windies, cracked the first boundary in the second over bowled by Washington Sundar. Hope too got into the act in the next over from Khaleel.

The stylish right-hander hit the first six of the innings, lofting Krunal Pandya over long-on. He perished in going for another big hit, caught on the boundary by Sundar off Yuzvendra Chahal's first ball of the match. His contribution was 24 in a first wicket partnership of 51.

Hetmyer slammed four boundaries and a six in his 21-ball 26 but was dismissed when trying to cut a delivery from Chahal. The ball bounced a little more than the southpaw expected and his shot was snaffled by Pandya.

India brought in Chahal and Sundar for Kuldeep Yadav and Jasprit Bumrah, who have been rested while West Indies retained the XI that played in Lucknow.

West Indies Cricket Team India vs West Indies 2018 India vs West Indies, 3rd T20I Cricket
Get the latest updates on IPL Auction 2023 and check out  IPL 2023 and Live Cricket Score. Like us on Facebook or follow us on Twitter for more sports updates. You can also download the NDTV Cricket app for Android or iOS.