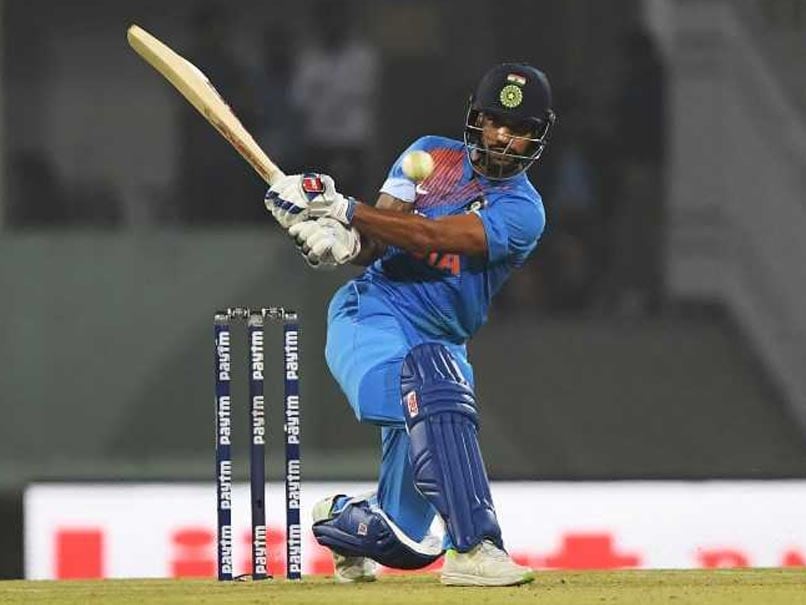 Shikhar Dhawan (92) and Rishabh Pant (58) notched up brilliant half centuries as India chased down the target in the final delivery of the nail-biting clash, completing a 3-0 whitewash over the Windies in the T20I series. In the chase of 182 runs, India lost skipper Rohit Sharma (4) and KL Rahul (17) early. Unperturbed by the dismissals, Pant and Dhawan took charge of India's chase to put the visitors on the backfoot. However, Pant was sent back in the 19th over with seven runs required to win. Later, Manish Pandey remained unbeaten on 4 runs to help India cross the line. Earlier, Nicholas Pooran (53 not out) and Darren Bravo (43 not out) played brilliant quick-fire knocks as the Windies posted 181/3. Pooran's 25-ball knock was laced with four boundaries and identical number of hits over the fence while Bravo's 37-ball knock had two boundaries and two sixes. The duo also forged an unbeaten 87-run fourth wicket stand to help the visitors post a challenging total. Opting to bat, Shai Hope and Shimron Hetmyer got the visitors to a good start, putting together a 51-run opening wicket stand. For India, Yuzvendra Chahal was the pick of the bowlers, returning figures of 2 for 28. (HIGHLIGHTS)

22:30 IST: We leave you with the highlights from the match. Thank you for joining us, until next time, it's goodbye!

22:25 IST: Winning runs!Manish Pandey takes a single from the flat delivery by Fabian Allen as India complete a 3-0 white-wash over the Windies.

22:23 IST: WICKET!Shikhar Dhawan trying to clear the infield, finds Fabian Allen in the deep. India need 1 run from 1 ball. What a turnaround!

22:13 IST: WICKET!Rishabh Pant was trying to play an unorthodox shot, but the delivery from Keemo Paul was in the blockhole and does the damage, too late. Pant departs for 58, India 175/3 in 18.2 overs.

22:03 IST: One bounce to the fence,brilliant lofted shot from Shikhar Dhawan straight down the ground to find four runs from Oshane Thomas's delivery. India 163/2 in 17 overs.

21:56 IST: Maiden half-century for Rishabh Pant,he brings it in 31 balls. He has hit 5 boundaries and 3 sixes in his knock so far.

21:51 IST: Boundary!Shikhar Dhawan hits it from the middle of the bat, to dispatch the delivery from Carlos Brathwaite for four runs towards deep square leg.

21:48 IST: SIX!Rishabh Pant has find the gap toward deep mid-wicket to hit Fabian Allen for a maximum. Pant is batting with a terrific strike rate of 133, it was his third six. India 130 for two in 14 overs.

21:45 IST: SIX!Rishabh Pant pulled out that shot almost with one-hand, to hit the delivery from Kieron Pollard for a maximum over long-on.

21:38 IST: Eighth T20I half-century for Shikhar Dhawan,much needed for India. He has laced the charge for the home side, his is laced with six boundaries and one hit over the fence. India 102/2 after 12 overs.

21:33 IST: SIX!Good length delivery from Oshane Thomas and Shikhar Dhawan dispatches the delivery for a maximum. 18 runs from the over, India 94 for 2 in 11 overs.

21:31 IST: SIX!First six of the innings from Rishabh Pant, lovely swing of the bat from the youngster to hit the delivery from Oshane Thomas for a maximum.

21:24 IST: Boundary to end the over,India 69 for two after 9 overs. Kieron Pollard has been brought back into the attack.

21:07 IST: WICKET!KL Rahul deprats for 17, he was trying to hit Oshane Thomas over the top, but ends up edging the ball straight into the gloves of Denesh Ramdin. India 45 for two in 5.2 overs. Rishabh Pant is the new batsman in.

21:00 IST: Boundary!Slower delivery from Brathwaite, Shikhar Dhawan steps up to hit the slower delivery down the ground for four runs, India 35/1 in 4 overs.

20:58 IST: Boundary!Well-placed from KL Rahul to find the fence towards sweeper cover, India 23 for one in three overs.

20:49 IST: Boundary!Short and wide from Oshane Thomas, Shikhar Dhawan picks his spot to find the rope towards off-side.

20:46 IST: Boundary!Rohit Sharma gets off the mark with the boundary, the delivery from Khary Pierre was drifting down the leg stump. India 5/0 after 1 over. Oshane Thomas to bowl from the other end.

20:43 IST: Rohit Sharma and Shikhar Dhawan walk into the crease to begin the chase.Spinner Khary Pierre to begin the proceedings for the Windies.

20:28 IST: First T20I half-century for Nicholas Pooran,what a gem of an innings from the young man coming in before Kieron Pollard. His innings was laced with four boundaries and identical number of sixes over the fence.

20:26 IST: SIX!Nicholas Pooran gets into an amazing position, hand-eye co-ordination on show, the delivery from Khaleel Ahmed has been dispatched for a maximum.

20:24 IST: SIX!Juicy full toss from Khaleel Ahmed and Darren Bravo dispatches it into the stands for a maximum.

20:21 IST: Boundary!Nicholas Pooran times the delivery from Bhuvneshwar Kumar to find the fence and that brings up the 150 runs on board for the Windies.

20:11 IST: SIX!Nicholas Pooran plays a switch-hit to smash the delivery from Yuzvendra Chahal for a maximum, he has moved to 27 runs from 11 balls.

20:06 IST: SIX!Good hit from Nicholas Pooran, comes from the sweet spot of the bat. Length delivery from Bhuvneshwar Kumar, Pooran rocks back to get six runs from it.

20:02 IST: Boundary!Darren Bravo hits the tossed up delivery from Krunal Pandya straight down the ground to find the fence.

19:59 IST: 100 runs up for Windies in 14 overs.The tourists will look to accelerate their scoring rate from here on. Krunal Pandya to continue from the other end.

19:52 IST: WICKET!Denesh Ramdin departs for 15, he was trying to make room for himself to hit Washing Sundar but in the end gets the bottom edge as the ball goes on to hit the stumps. Windies 94 for three after 12.5 overs. Rohit Sharma straight away deploys a slip in place for the new man.

19:51 IST: SIX!Denesh Ramdin steps up to hit Washington Sundar for a maximum over deep mid-wicket.

19:43 IST: Boundary!Darren Bravo hits the widish delivery from Yuzvendra Chahal to find the fence straight down the ground. 11 runs from the over, Windies 78 for two.

19:37 IST: WICKET!Quicker delivery from Yuzvendra Chahal, Shimron Hetmyer looked a bit restless, did not time the ball to perfection. Chahal picks his second wicket, Windies 62 for 2 in 9 overs. Denesh Ramdin is the new batsman in.

19:33 IST: In the air, just short of Washington Sundar!Shimron Hetmyer survives, Windies 59 for one after 8 overs.

19:26 IST: WICKET!Yuzvendra Chahal provides the breakthrough in the very first delivery, Shai Hope top edged it, the ball went up miles in the air. Washington Sundar judges it well to catch it, Shai Hope departs for 24. Windies 51 for one in 6.1 overs. Darren Bravo is the new batsman in!

19:22 IST: SIX!First maximum of the innings from Shai Hope, slightly short delivery from Krunal Pandya and Hope was quick to pounce on it and dispatch it over long-on.

19:17 IST: Welcome boundary for Bhuvneshwar Kumar!Good length delivery from Bhuvneshwar, Shai Hope picks the length well to hit the ball to the fence, with fine leg inside the circle.

19:15 IST: Boundary!Shimron Hetmyer moves to 12 runs from 9 balls, with that shot. Good shot selection, rocks back to hit Washington Sundar straight down the ground to pick up four runs.

19:11 IST: Boundary!The delivery from Khaleel Ahmed was drifting down the leg, and Shimron Hetmyer just chips it over the top to find the fence, with fine leg inside the circle. Windies 15 for no loss after three overs.

19:10 IST: Boundary!Shai Hope takes a swing at the delivery from Khaleel Ahmed to find the fence towards the off side. So both the openers have got a boundary each within the third over of the match.

19:06 IST: Boundary!First for the Windies, Shimron Hetmyer played the ball really well, went deep inside the crease to time the ball from Washington Sundar to perfection. Windies six for no loss after 2 overs.

19:04 IST: Just one run from the over by Khaleel Ahmed,Windies 1/0 after 1 over. Khaleel Ahmed found some swing in the very first over. Washington Sundar to bowl from the other end.

19:00 IST: Shai Hope takes guard in front of the stumps,Shimron Hetmyer is on the non-strikers end. Khaleel Ahmed has the new ball for India. One slip in place, fine leg inside the circle for India.

18:34 IST: Team news:Windies are unchanged, India have brought in all-rounder Washington Sundar and wrist-spinner Yuzvendra Chahal for the dead rubber.

#WIvIND WINDIES win the toss and elects to bat first against India in the 3rd and final T20I. pic.twitter.com/KViHNDbecq

18:20 IST: Pitch report: "A rather flat track here in Chennai despite the sticky-looking texture, and it's very likely to be a be a fantastic wicket for batting," says Sunil Gavaskar.

18:00 IST: Hello and welcome to the live commentary from the third and final T20I between India and the Windies.

The spin department may see the return of Yuzvendra Chahal in the absence of Kuldeep while Krunal Pandya will expect to build on an impressive start to his international career. The visitors, on the other hand, have been in disarray in the T20s after posing an unexpected challenge to the Indians in the ODIs. The absence of regular openers - Chris Gayle and Evin Lewis - and the decision to tinker with the combination at the top hasn't helped their cause either.

Captain Carlos Brathwaite admitted they had to make do with the resources available and the team will aim to end the series with a consolation win. The likes of Kieron Pollard, Darren Bravo and Denesh Ramdin haven't fired and the impressive Shimron Hetmyer, pushed up the order, hasn't found the going easy to add to the Windies' woes. Among the bowlers, Oshane Thomas has impressed the most with his pace and ability to take wickets but has lacked support from the others.