MS Dhoni was left out of the T20I team against the Windies and also the one travelling to Australia. 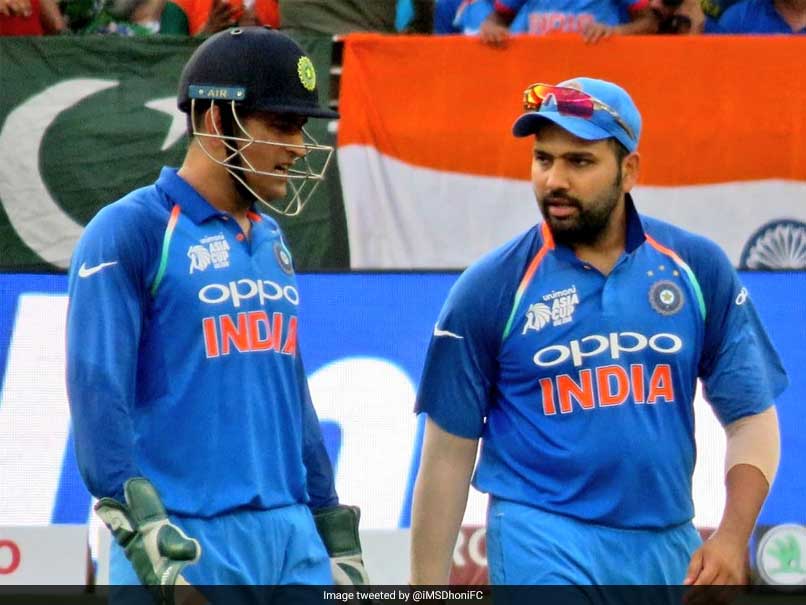 India coasted to a 3-0 series whitewash over the visiting Windies team despite the absence of key stars like Virat Kohli and MS Dhoni from the Twenty20 International (T20I) series. While Kohli was rested, Dhoni was shockingly left out of the India squads for the T20I series against the Windies as well as Australia. The likes of Virat Kohli, Sachin Tendulkar and chief selector MSK Prasad have all spoken about Dhoni's absence and on Sunday night it was the turn of India's stand-in captain, Rohit Sharma, to have his say in the matter.

After the clean sweep over the Windies, Rohit Sharma rued Dhoni's absence from the team, saying that the former captain not being part of any team was "a big miss".

"MS (Dhoni) was not part of the Nidahas Trophy in Sri Lanka also. MS not being in any team is a big miss. His presence in the team itself is a huge boost for a lot of the players, not just me, especially the younger players," said Rohit Sharma.

According to chief selector MSK Prasad, Dhoni's T20I career is not over and the decision to leave him out was made to shore up back-up options behind the stumps.

The former India captain in not part of the T20I team but has made it to the ODI squad for the Australia tour.

With the culmination of the Windies series, the focus will now shift to the daunting tour Down Under.

Rohit Sharma said it was important for Shikhar Dhawan to return to form ahead of the crucial tour of Australia, which will be a completely "different ball game".

Dhawan, who struggled throughout the preceding ODI series against West Indies, returned to form with a smashing 92 off 62 balls to help India beat the visitors by six wickets in the final T20I.

Dhawan and young Rishabh Pant (58 off 38) stitched 130 runs off 80 balls for the third wicket on Sunday to lay the foundation for the win after India were in a spot of bother at 45 for 2 while chasing 182.

"It was important from the team's perspective and for the players to get some runs ahead of the important Australia tour. Shikhar especially was batting well in the ODI series but he was not able to get big scores. I am glad that he could play a match-winning knock and get some form under his belt before the crucial tour," Rohit said.

"Rishabh was also hungry to go out and get some runs. It was the perfect situation. We were two down inside the first six overs. There was a bit of pressure as well. They handled it well and it was a match-winning partnership. It is important in the team's perspective that both these guys got runs," he said.

India's tour of Australia starts with the three-match T20I series in Brisbane on November 21.

MS Dhoni India vs West Indies 2018 India vs West Indies, 3rd T20I Cricket
Get the latest updates on IPL Auction 2023 and check out  IPL 2023 and Live Cricket Score. Like us on Facebook or follow us on Twitter for more sports updates. You can also download the NDTV Cricket app for Android or iOS.