The 66-run win gave Pakistan a 1-0 lead in the three-match series and also their biggest T20I victory over Australia. 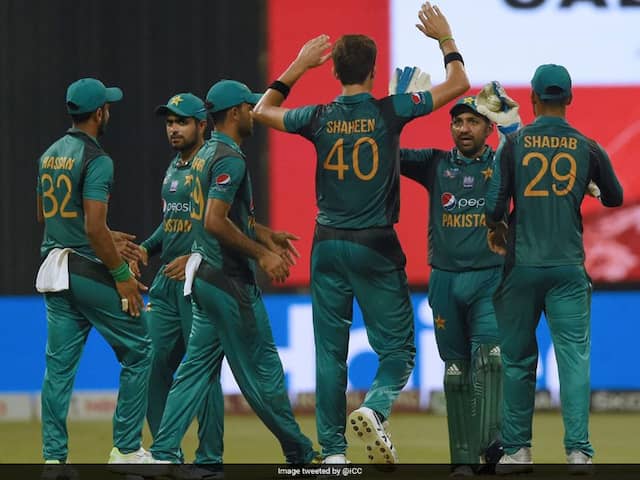 Pakistan crushed Australia by 66 runs in the first T20I in Abu Dhabi.© AFP

Opener Babar Azam struck an unbeaten 68 while spinner Imad Wasim capped a return to international cricket with three wickets as Pakistan crushed Australia by 66 runs in Wednesday's opening T20I match in Abu Dhabi. Azam hit five fours and a six in his 55-ball innings as Pakistan made 155 for eight before Wasim (3-20) ripped apart Australia's top order as they slumped to 89 all out -- their joint-third lowest T20I score -- at Sheikh Zayed Stadium. The win gave Pakistan a 1-0 lead in the three-match series and also their biggest T20I victory over Australia, improving upon the 45-run win they achieved in Harare in July.

Only twice have Australia scored fewer runs in a T20 international, making just 79 against England at Southampton in 2005 and 86 in a defeat by India at Dhaka four years ago.

Left-arm spinner Wasim, playing his first match for Pakistan since October last year, bowled both Australian openers, Aaron Finch (nought) and D'Arcy Short (four), in the first over of their innings.

Medium pacer Faheem Ashraf, who finished with 2-10, then dismissed Glenn Maxwell (two) and Chris Lynn (14) to further derail the Australians.

Ben McDermott was run out without scoring before Wasim came back into the attack to dismiss Alex Carey for one, leaving Australia in tatters at 22-6.

Only a fighting knock of 34 from Nathan Coulter-Nile, the last man out, ensured Australia didn't succumb to their lowest T20I total.

Paceman Shaheen Shah Afridi finished with 2-23 while Hasan Ali and Shadab Khan took a wicket each.

"Our bowling attack is good, so we try to put some runs on the board and back ourselves to defend," said Sarfraz.

"Babar Azam and Hafeez batted beautifully and when we bowl we always try to take wickets when we have the ball in our hands."

Finch said the defeat was embarrasing.

"It's pretty embarrassing, to be fair," said Finch. "I think we were a little bit one-dimensional while batting, but that's a learning experience and I would say Pakistan have got a lot of variety in their bowling."

Earlier, Pakistan were lifted by Azam and Mohammad Hafeez (39) as they added 73 for the second wicket in quick time.

But once Hafeez fell in the 14th over, Pakistan lost six wickets for just 28 runs with Sarfraz, Ashraf and Wasim falling without scoring while Shadab made just one.

It was left to Azam to keep one end intact during his sixth T20 half-century while Hasan used the long handle effectively, hitting two boundaries and a six in a handy 17 off eight balls to help add 41 in the last five overs.

Billy Stanlake (3-21) and Andre Tye (3-24) were the successful Australia bowlers.

The second and third T20 internationals will be played in Dubai on Friday and Sunday.

Australia Cricket Team Babar Azam Imad Wasim Pakistan vs Australia, 1st T20I Cricket
Get the latest updates on IPL 2020, check out the IPL Schedule for 2020 and Indian Premier League (IPL) Cricket live score . Like us on Facebook or follow us on Twitter for more sports updates. You can also download the NDTV Cricket app for Android or iOS.