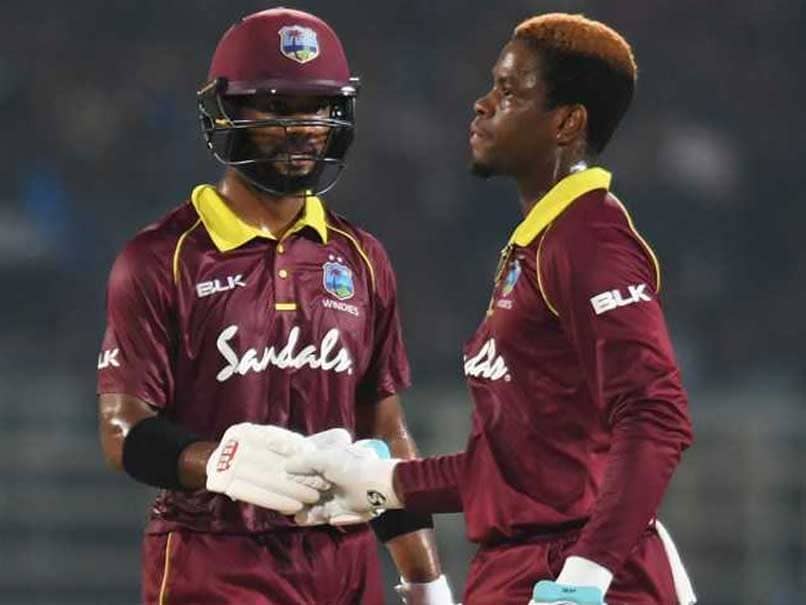 Run-machine Virat Kohli sprinted to fastest 10,000 ODI runs but the Windies stole a tie from India with Shai Hope's gutsy hundred in an exhilarating second One-Day International on Wednesday. India notched up 321 for six, while the Windies, needing 14 runs in the final over and five off the last ball, levelled the score with Hope (123 not out) cutting Umesh Yadav for a boundary. Besides Hope's ton, there was also Shimron Hetmyer's 94-run blitzkrieg. Kuldeep Yadav showed his worth again with three wickets.

Opting to bat, Kohli fired 157 off 129 balls, while Ambati Rayudu, who is seen as the answer to the team's persistent problems at the number four slot by Kohli himself, made a fluent 73 off 80 deliveries.

The 29-year-old Kohli, who hit 13 boundaries and four sixes, bettered the iconic Sachin Tendulkar's record by an incredible 54 innings, and then went past 1000 runs in the calendar year in only 11 innings, which is also the fastest.

During their stay in the middle, the two were involved in a partnership of 139 runs in 142 balls for the third wicket at the Dr YSR ACA-VDCA Cricket Stadium, set amidst picturesque hills.

While he acknowledged the fans' applause by raising his bat after reaching the 10k landmark, the crowd was on its feet again when Kohli creamed Marlon Samuels to the cover boundary to bring up his century, his 37th in this format.

Kohli pulled, cut, flicked and drove in the manner he does best before cutting loose towards the end. A six down the ground off debutant left-arm pacer Obed McCoy brought up 1,000 runs for him in the year.

He then deposited McCoy over long-on for another maximum and in the next over, smashed Roach for a six and two fours to power his team past 300.

India were, however, off to a poor start when Rohit Sharma (4) was dismissed early by Kemar Roach in the fourth over of the day.

After the fall of his opening partner, who like Kohli entered the game on the back of a big hundred in the series-opener, Shikhar Dhawan continued to find the fence a couple of times while playing an uppercut to slice Roach's short ball outside off for a six over the third man.

However, Ashley Nurse had Dhawan trapped in front of the wicket after a West Indies review went in their favour.

At 40 for two in the ninth over, Rayudu joined his skipper and the two played fluently to keep the run rate healthy.

Save the one dropped catch by West Indies skipper Jason Holder who ran backwards from mid-off, Kohli looked untroubled throughout and seemed to be satisfied with the way his partner at the other end, Rayudu, was batting. Kohli was on 44 when he got the life.

The West Indies spinners, especially senior pro Devendra Bishoo, could not deliver on a pitch that offered turn and played slow.

That India eventually set the visitors a target of 322 was only due to Kohli's brilliance, as conditions and the quality of opposition bowling don't seem to matter to him anymore.

Earmarked for the critical number four slot through to the 2019 World Cup, Rayudu reposed his skipper's faith by compiling a neat innings that contained eight boundaries.

The crowd favourite, Mahendra Singh Dhoni, walked in to a rousing reception and was bowled by McCoy, his maiden wicket, for 20.

Rishabh Pant was slotted ahead of Dhoni but the plan was dropped at the insistence of Kohli, who relayed a message to the dressing room while he was toying with the opposition's bowlers.

When he eventually came, Pant also fell quickly, for a 13-ball 17, but Kohli remained strong and shifted gears to launch another onslaught, barely three days after a blazing 140-run knock.

Kieran Powell (18) and Chanderpaul Hemraj started West Indies' response by hitting a few quick boundaries, but Mohammed Shami had the former caught behind.

Kohli introduced Kuldeep Yadav and the chinaman, having missed the series opener, delivered straightaway when he foxed Hemraj for a 24-ball 32.

The spinner then bowled seasoned Marlon Samuels (13) to leave the visitors in a spot of bother at 78 for three in 12 overs.

A 143-run partnership ensued between Hetmyer and Shai Hope for the fourth wicket as the duo took calculated risks.

Taking off from where he left in the first match, Hetmyer launched into the Indian spinners and rattled them with a flurry of sixes. He was destructive in the region between long-off and deep midwicket and was most harsh on Yuzvendra Chahal, who leaked 18 runs in one of the middle overs.

Shai Hope was the perfect foil for the marauding Hetmyer, as the former kept rotating strikes while finding the fence on a fairly regular basis.

However, Chahal had the last laugh when Hetmyer top-edged an innocuous short ball for a skier to Kohli at short cover. At that point, West Indies needed 101 runs in 18 overs as Rovman Powell joined Hope, and the equation was brought down to 63 in the last 10 with skipper Holder among the five batsmen remaining but they could only tie the game.

Virat Kohli India vs West Indies 2018 Cricket India vs West Indies, 2nd ODI
Get the latest updates on IPL 2020, check out the IPL Schedule for 2020 and Indian Premier League (IPL) Cricket live score . Like us on Facebook or follow us on Twitter for more sports updates. You can also download the NDTV Cricket app for Android or iOS.