Siraj might have taken his maiden international wicket but ended up conceding 53 runs in his allotted four overs at an economy of 13.25. 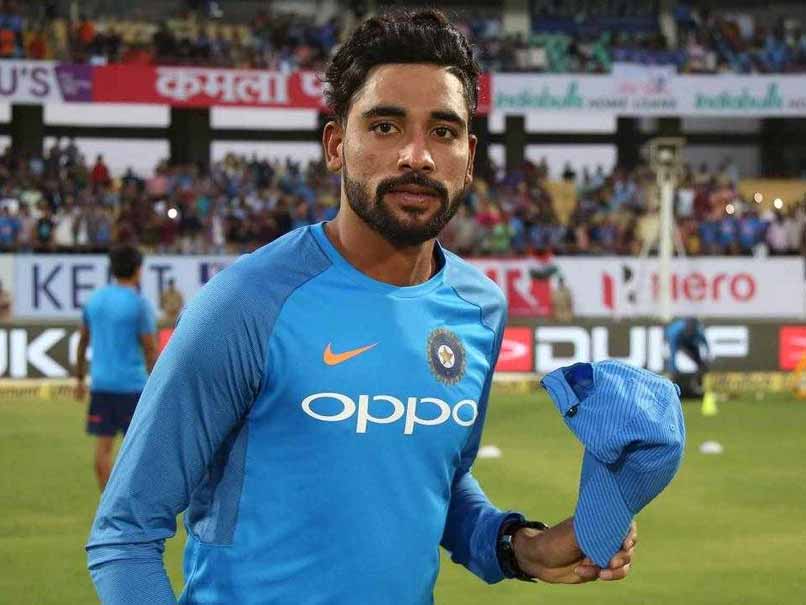 Mohammed Sirajon Saturday got his international cap from Team India coach Ravi Shastri ahead of the second Twenty20 International against New Zealand at the Saurashtra Cricket Association in Rajkot. A very emotional Siraj was seen in tears just after the national anthem but his dream debut didn't all go as planned. The Hyderabad pacer might have taken his maiden international wicket but ended up conceding 53 runs in his allotted four overs at an economy of 13.25.

Coming out in defence of Siraj, fellow pacer Jasprit Bumrah said the Hyderabad bowler will learn from his mistakes and come good in the future.

The 23-year-old Siraj was given the second over to bowl and got the prize wicket of New Zealand captain Kane Williamson.

"It's okay, it was his first game. On a difficult wicket it's always difficult (to bowl). He's coming into the new team, so it takes time for a bowler to adjust. He'll learn," said Bumrah after the hosts slumped to a 40-run defeat against the Black Caps who levelled the three-game series 1-1.

"As a bowler when you get hit, you learn a lot. So I think after this experience he'll be a better bowler when he comes into the next match."

Bumrah, who returned with impressive figures of 0-23, was seen chatting with Siraj during the latter's spell.

"I was just saying that as a bowler when you get hit, you learn. It's difficult because as a bowler, on this wicket, it was challenging and for a new guy to come in against such opposition it's difficult," he said.

"I was just trying to give him confidence, that it's ok, every bowler goes for runs, you get hit. But this is how you'll learn and you'll come back, so I'm sure that whenever he plays more, he'll be better than before. I think he'll be better in the next match," said Bumrah, who made his India debut against Australia Down Under in January, 2016.

Comments
Topics mentioned in this article
India Cricket Team New Zealand Cricket Team Mohammed Siraj Jasprit Bumrah India vs New Zealand Cricket Virat Kohli
Get the latest updates on ICC T20 Worldcup 2022 and CWG 2022 check out the Schedule, Live Score and Medals Tally. Like us on Facebook or follow us on Twitter for more sports updates. You can also download the NDTV Cricket app for Android or iOS.