India vs England: Rohit Sharma and Virat Kohli put on a massive opening partnership, and Twitter was left in awe of India's captain and vice-captain. 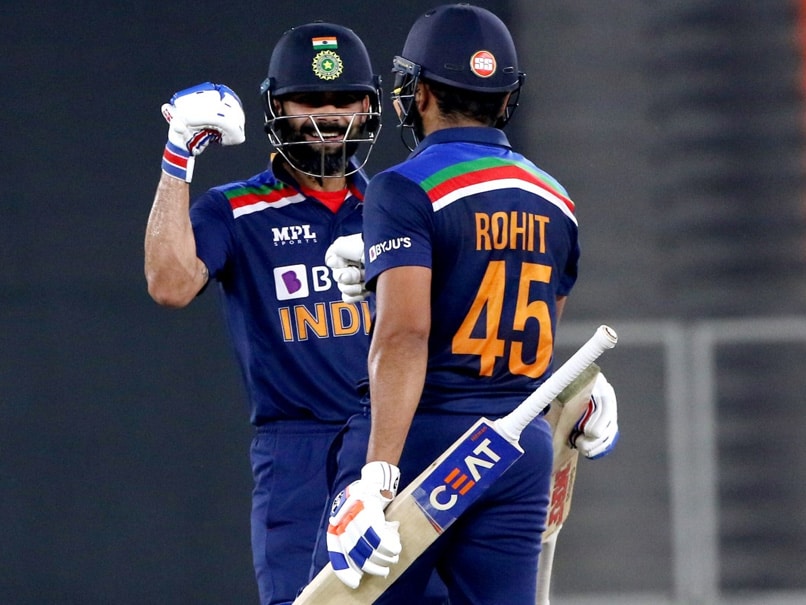 India dropped KL Rahul in the fifth T20 International (T20I) against England at the Narendra Modi Stadium in Ahmedabad to accommodate an extra bowler in the form of T Natarajan. Captain Virat Kohli moved up to open the inning alongside Rohit Sharma, and the pairing gave India a blistering start. Their 94-run partnership in nine overs set India up for a mammoth total of 224/2, with Rohit Sharma taking on the role of aggressor, blazing 64 off 34 deliveries. It was his 22nd T20I half-century and put India in a strong position in the series decider.

The captain and vice-captain's opening partnership - India's highest one this series - impressed experts and fans alike on social media.

"Can't be a better opening combo on the eye than @imVkohli & @ImRo45 !!! Could easily match @virendersehwag & @sachin_rt if they stick with this combo," wrote former England captain Michael Vaughan.

Can't be a better opening combo on the eye than @imVkohli & @ImRo45 !!! Could easily match @virendersehwag & @sachin_rt if they stick with this combo ... #INDvENG

Former India batsmen Wasim Jaffer and Virender Sehwag both stayed true to their nature and had the perfect memes for the occasion.

Another user described them as "Brothers of Destruction", referring to WWE icons Undertaker and Kane.

It was Rohit Sharma who dominated the partnership as Kohli dropped anchor. He smashed five sixes and four boundaries in his 34-ball knock, as he tore into the England attack.

He hit Adil Rashid for a six over midwicket to get his assault started, before playing two gorgeous straight drives off Mark Wood.

The highlight of his knock was probably the pickup shot off Wood, when he nonchalantly pulled him behind square for a six.

Once Rohit got out, Kohli started to accelerate and reached his 28th T20I half-century off 36 deliveries. It was his third of the series, as he consolidated his position as the highest run-scorer in the five-match contest.

He carried his bat, finishing unbeaten on 80 off 52 deliveries, with seven boundaries and two sixes.

Virat Kohli Rohit Sharma Cricket
Get the latest updates on ICC Women's Cricket World Cup 2022 and IPL 2022, check out the Schedule , Live Score and IPL Points Table. Like us on Facebook or follow us on Twitter for more sports updates. You can also download the NDTV Cricket app for Android or iOS.