India vs England: T Natarajan "Thrilled To Be Back In Blue" Ahead Of T20I Series Decider

India vs England: T Natarajan completed his rehab at the NCA and joined the Indian squad ahead of the fifth and final T20I against England. 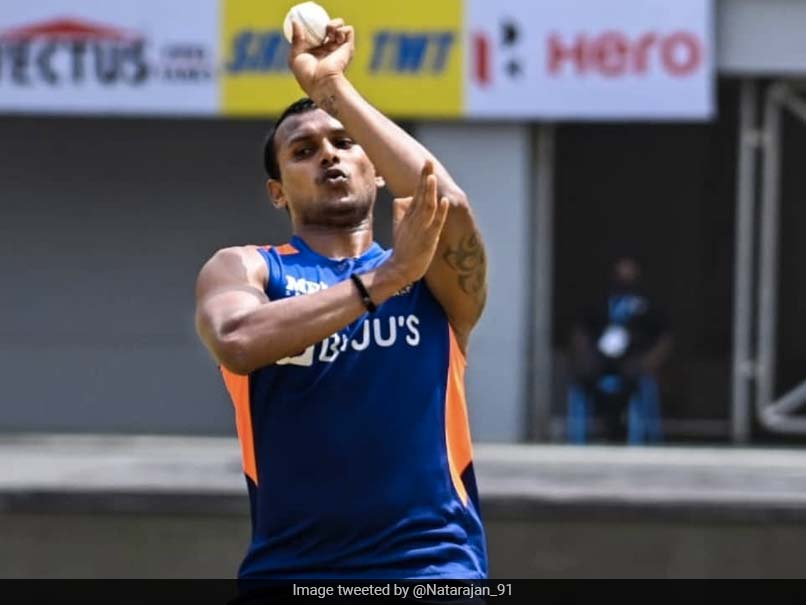 T Natarajan was out of action due to a shoulder niggle.© Twitter

India's latest pace bowling find T Natarajanis "thrilled" to join the squad ahead of the fifth and the final T20I against England. Natarajan made his debut in the limited-overs format against Australia in December 2020 while his first match in the longest format of the game came in January. Having missed the first four games of the T20I series due to a knee and shoulder injury, the pace sensation is now delighted to be back after completing his rehab at the National Cricket Academy.

"Choose a job you love and you will never have to work a day in your life" - Thrilled to be back in blue with the boys @BCCI," Natarajan tweeted.

"Choose a job you love and you will never have to work a day in your life" - Thrilled to be back in blue with the boys @BCCI pic.twitter.com/gRQ3C3hZic

Natarajan had a dream run in the T20I series in Australia and skipper Virat Kohlihad praised the youngster for his consistent showing.

"Special mention for Natarajan, in the absence of (Mohammed) Shami and Jasprit (Bumrah), he stood out and really delivered under pressure," Kohli had said.

"It is outstanding because he is playing his first few games at the international level. He looks very composed, he is a humble and hard-working guy, he is sure of what he is doing.

"I hope he continues to keep working hard on his game and gets better because a left-arm bowler is an asset for any team and if he can keep bowling in this way consistently, it will be a great thing for us heading into the World Cup next year."

Coming back to the ongoing T20I series, a blistering half-century from Suryakumar Yadav (57), followed by a brilliant performance from the bowlers, had helped India win the fourth T20I of the ongoing series against England at the Narendra Modi Stadium on Thursday evening.

With the eight-run win over England, India levelled the series 2-2 with the series decider to be played today at the same venue.

Virat Kohli India vs England 2020-21 Cricket
Get the latest updates on ICC Women's Cricket World Cup 2022 and IPL 2022, check out the Schedule , Live Score and IPL Points Table. Like us on Facebook or follow us on Twitter for more sports updates. You can also download the NDTV Cricket app for Android or iOS.