India vs England (IND vs ENG) T20 Series 2021: India cruised past England to win the fifth T20I by 36 runs, at the Narendra Modi Stadium in Ahmedabad on Saturday. The win also helped India seal a 3-2 win in the five-match series. 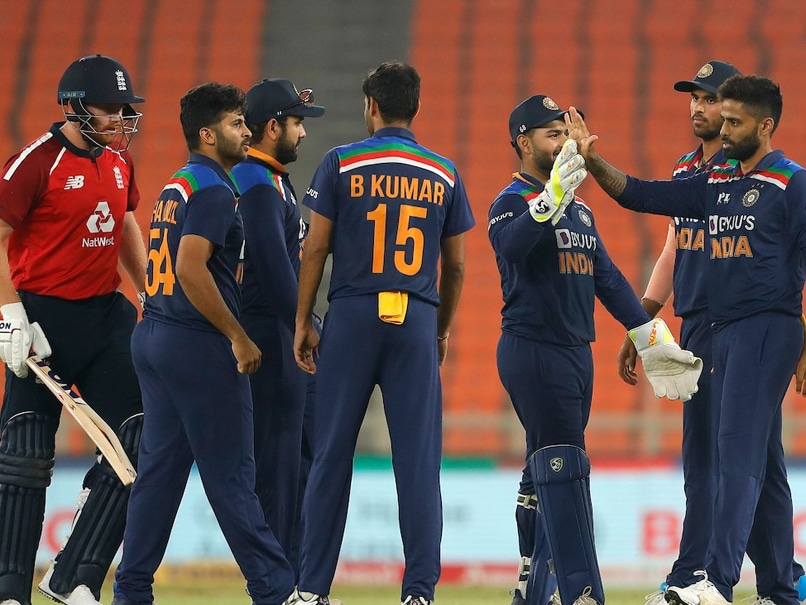 IND vs ENG: India celebrate a wicket during the 5th T20I, at the Narendra Modi Stadium.© BCCI

Sealing a 3-2 win in the five-match series, India defeated England by 36 runs in the fifth and final T20I, at the Narendra Modi Stadium in Ahmedabad, on Saturday. The visitors could only muster 188 for eight in 20 overs, in response to India's target of 225 runs. The hosts were in top form, putting in an excellent start after being sent in to bat. Openers Rohit Sharma (64) and Virat Kohli (80) slammed half-centuries to help India reach 224 for two in 20 overs. Captain Kohli was also unbeaten for his side, alongwith Hardik Pandya (39), and the duo finished in style. Suryakumar Yadav also made a noteworthy contribution, adding 32 runs to scoreboard. England's bowling department couldn't really find much form in the fifth T20I, with Adil Rashid and Ben Stokes registering a wicket each. During their chase, the visitors had put in a great start, with Jos Buttler (52) and Dawid Malan (68) scoring half-centuries. It was only after the dismissal of the duo, that it all came crashing down for England. Shardul Thakur was in excellent form for India, taking three wickets and Bhuvneshwar Kumar also registered two dismissals. Meanwhile, Hardik Pandya and T Natarajan took a wicket each. The win is also a bonus for India, and is a good sign of their preparations for the upcoming T20 World Cup. (SCORECARD)

Mark Wood India vs England 2020-21 India vs England, 5th T20I Live Score Live Cricket Score Cricket Live Blogs
Get the latest updates on ICC Women's Cricket World Cup 2022 and IPL 2022, check out the Schedule , Live Score and IPL Points Table. Like us on Facebook or follow us on Twitter for more sports updates. You can also download the NDTV Cricket app for Android or iOS.