On the second day of the Kolkata Test, Magnus Carlsen and India's Viswanathan Anand rang the ceremonial bell at Eden Gardens to mark the beginning of the first session. 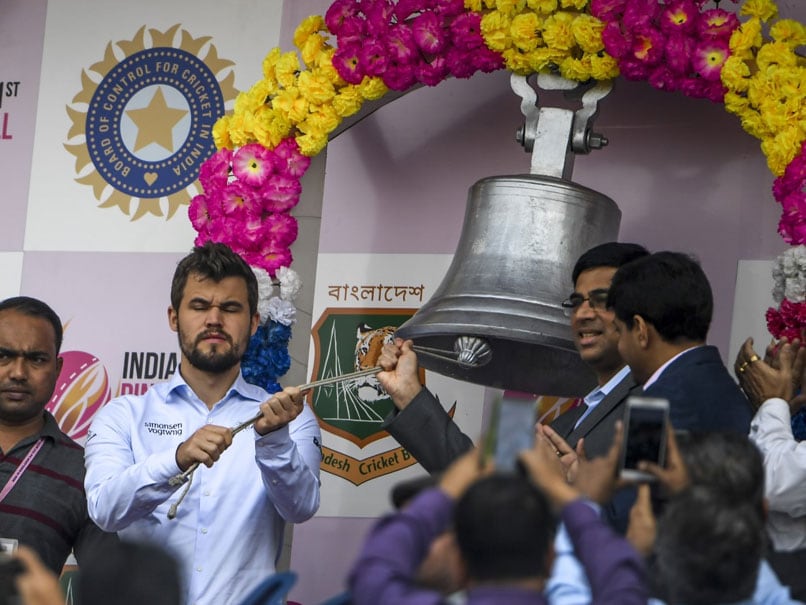 Magnus Carlsen was in the city for Tata Steel Rapid and Blitz chess tournament.© AFP

India made an impressive debut in the day-night Test cricket with a victory by an innings and 46 runs over Bangladesh at Eden Gardens on Sunday. Kolkata had gone pink for India's first-ever pink ball Test, with prominent sportspersons and politicians gracing the historic match that concluded inside three days in the favour of Team India. Norwegian chess grandmaster and reigning world champion Magnus Carlsen also came to witness India's day-night Test debut as he was in the city for Tata Steel Rapid and Blitz chess tournament. On the second day of the Kolkata Test, Magnus Carlsen and India's Viswanathan Anand rang the ceremonial bell at Eden Gardens to mark the beginning of the first session.

Carlsen shared his experience in an interview to The Hindu, saying: "What happened is, Anand rang the bell and I stood there, and looked stupid. That would be my summary of the match. I have a lot to learn when it comes to cricket."

He asked further, "Is the match still on or it's over?"

Carlsen came up with an amusing reply when he was told that India have won. "So... no more chances of going there!"

With the win over Bangladesh, India completed a 2-0 clean sweep over the visitors.

This is India's third consecutive clean sweep in Tests, a record fourth successive win by an innings and a record seventh series triumph in the longest format.

Eden Gardens India vs Bangladesh Cricket India vs Bangladesh, 2nd Test Viswanathan Anand Magnus Carlsen Chess
Get the latest updates on ICC Women's Cricket World Cup 2022 and IPL 2022, check out the Schedule , Live Score and IPL Points Table. Like us on Facebook or follow us on Twitter for more sports updates. You can also download the NDTV Cricket app for Android or iOS.